Size750mL Proof99 (49.5% ABV)
Aged for twelve years in the heart of Kentucky bourbon country, each bottle of this bourbon comes from a single barrel.
Notify me when this product is back in stock. 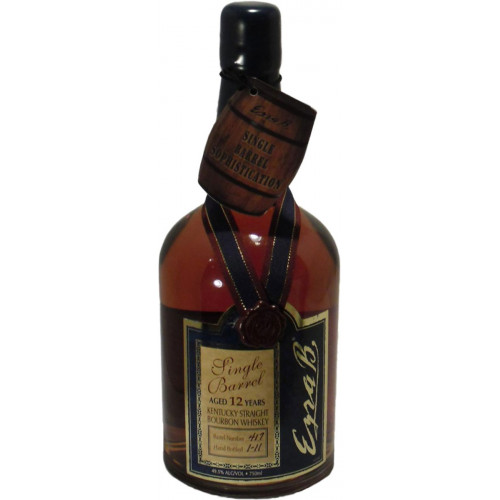 Today, Ezra Brooks 12 Year Old Single Barrel Kentucky Straight Bourbon Whiskey continues to be produced in the heart of Kentucky. The bourbon is made from a mash of corn, malted barley and rye, which are milled and mashed before being fermented in accordance with the traditional sour mash method. By using sour mash, which refers to the art of using a small amount of spent mash from an older batch of bourbon in order to catalyze fermentation in a new batch of bourbon, Ezra Brooks is able to maintain consistency with each bottling.

Following distillation, the bourbon is aged for a dozen years in new, American oak casks. The casks contribute a medium-full body to the bourbon, and provide it with hints of oak, caramel, honey, chocolate and orange zest. However, since each bottle of Ezra Brooks Single Barrel is aged in a single cask rather than being blended together, each bottle is slightly different and entirely interesting.