Size750mL Proof86.6 (43.3% ABV)
Aged for nearly 10 years, this bourbon has been awarded the title of "Whiskey of the Year"on five separate occasions.
Notify me when this product is back in stock. 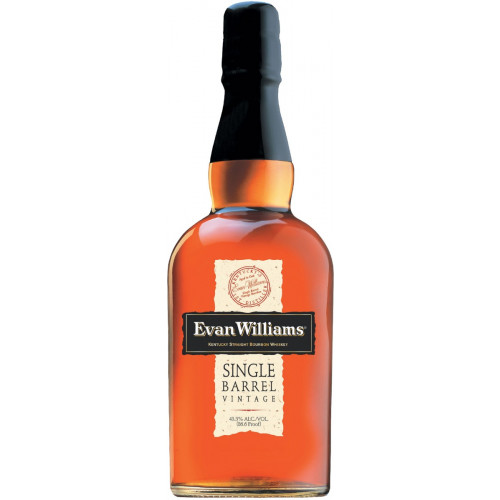 After emigrating from Wales to Kentucky in 1783, Evan Williams established a distillery along the banks of the Ohio River. His eponymous distillery, which quickly earned a reputation for producing some of the finest bourbon in the country, was Kentucky's first commercial distillery. Today, many years and barrels later, the Evan Williams Distillery continues to produce bourbon using the same time-honored methods William pioneered over two centuries ago.

Evan Williams Single Barrel Vintage 2008 Bourbon Whiskey is made from a secret mashbill. Once the grains used to make the bourbon arrive at the distillery, they are cooked in Kentucky limestone water in a specific order and at specific temperatures in order to create a sweet mash. The mash is fermented using a seven-generation-old family yeast before being distilled through a copper-column still. Following distillation, the bourbon is matured in new, American oak casks.

The 2008 Vintage of Evan Williams Single Barrel is between nine and ten years old (since each bottle of the bourbon is matured in a single cask rather than being blended together from a batch of casks, each bottle's exact age varies). In addition, the barrels used in this release were matured on the top floor of Rickhouse Y in Bardstown, Kentucky. Since the top floor of the distillery's warehouse is exposed to more heat than other floors, the bourbon and oak are forced to expand and contract as the temperature gradient changes.

As a result of being matured for nearly a decade in the Kentucky heat, Evan Williams Single Barrel Bourbon has an aroma of spicy oak, cinnamon and clove that gives way to notes of caramel, pecan and roasted nuts on the palate. The initial flavors lead to touches of creamy vanilla and and honeyed oak, and finish with a hint of cinnamon spice.

Previous vintages of Evan Williams Single Barrel Bourbon have earned 97 points from Wine Enthusiast, and have been awarded the title of "Whiskey of the Year,"on five separate occasions.

Aroma of spicy oak, cinnamon and clove that gives way to notes of caramel, pecan and roasted nuts on the palate. Initial flavors lead to touches of creamy vanilla and and honeyed oak, and finish with a hint of cinnamon spice.