Size750mL Proof86 (43% ABV)
This patriotic release is dedicated to US veterans, featuring the exceptional stories of the American heroes on each bottle.
Notify me when this product is back in stock. 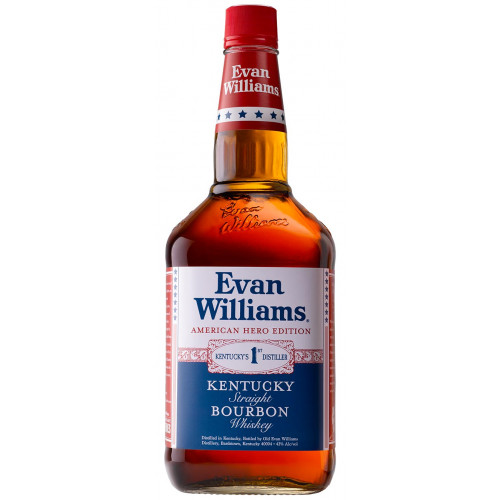 Heaven Hill distillery was founded in 1935, Immediately after Prohibition ended in the United States in 1933, after a group of investors decided to be ready for the rebounding market. The investors including the famous Joseph L. Beam. Heaven Hill is located on a massive estate boasting 22 multi-story rick-houses across hundreds of acres of land. Now known as the “Heaven Hill Bernheim Distillery” they have the second-largest inventory of Bourbon Whiskey in the world. It is also the only remaining family-owned distillery in Kentucky.

Evan Williams has a diverse core lineup, including their very popular signature Black Label, as well as some limited releases. The famous brand has decided to celebrate brave military veterans and pay tribute to American heroes and heroines, sharing their exceptional stories of honor and bravery with this exclusive all-American limited release. Essentially their Black Label straight bourbon expression with a patriotic twist, each American Hero Edition bottle features a chosen veteran, showcasing their various inspiring stories and achievements.

Emblazoned with patriotism, this stars and stripes straight bourbon expression is meant by Evan Williams to be an ultimate symbol of American independence. “The American-Made Heroes program encompasses the spirit of Evan Williams’ American heritage and those who protect the American spirit day in and day out. Every hero has a story, and Evan Williams is honored to share them” (Chris Ratterman, Evan Williams Bourbon Brand Manager).

The nose is light with deep vanilla and mint. The palate has flavors of oak, brown sugar and caramel, the finish is medium to long.