Learn more
Size750mL Proof92 (46% ABV) each *Please note that the ABV of this bottle may vary
Crafted by the first distillery in England in over a century, English Whisky Co. Peated Single Malt Whisky earned a score of 94 points from the Beverage Testing Institute.
Notify me when this product is back in stock. 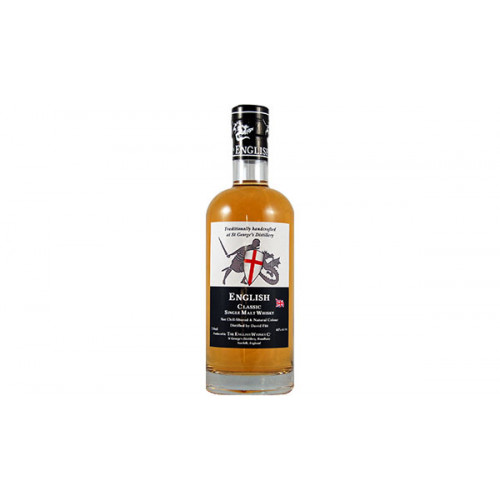 "Our objective is to produce the finest whisky in the world," says Andrew Nelstrop, the co-founder and Managing Director of St. Georges Distillery. Situated in an isolated region of East Anglia, St. Georges was founded in 2006 and is the first distillery to open its doors in England in over a century. "The idea was certainly my father's," Andrew admits. "He used to sit with his father, who thought it was crazy that we would send our barley to Scotland only to have it come back as whisky. We could just make it right here."

English Whisky Co. is crafted at St. Georges Distillery, which is surrounded by streams and meadows. "East Anglia is the home of malting barley for the whole of Europe," says Andrew. "It supplies 60% of the barley used in Scotland for whisky." East Anglia's unique climate — it holds records for being the hottest, coldest and wettest area in the country, according to the distillery — result in a hardened strain of barley that is ideal for distillation.

English Whisky Co. Classic Single Malt Whisky is crafted from East Anglian barley, which is harvested before being fermented and twice distilled through Nelstrop's copper pot stills. It has an aroma of malt, citrus and wood tannins that give way to notes of fresh herbs, honeyed oak and cinnamon on the palate. The finish is warming and spicy, with a touch of cloves, almonds and marshmallows. The whisky earned the Silver Medal at the San Francisco World Spirits Competition in 2013.

English Whisky Co. Peated Single Malt Whisky is also crafted from East Anglian barley, which is harvested and malted before being dried over a peat flame. Once the barley has been peated, it is distilled in a process that is similar to the Classic Malt. The peated barley adds a touch of salty brine and smoke to the whisky, and complements its notes of roasted nuts, fire embers and graham crackers. The whisky earned the Double Gold Medal at the San Francisco World Spirits Competition in 2013, and earned a score of 94 points from the Beverage Testing Institute.

Pick up a pair of English whiskies today!

Classic Malt: Aroma of malt, citrus and wood tannins that give way to notes of fresh herbs, honeyed oak and cinnamon on the palate. Finish is warming and spicy, with a touch of cloves, almonds and marshmallows.