This product is available in: CA, ND, TX Unfortunately, we can't ship to PO Boxes and APO addresses.

Size750mL Proof90 (45% ABV)
Elvis Presley was a man of many nicknames, one being "Tiger Man". Named after the famous album, this Tennessee whiskey is crafted with a mash bill of 80% corn, 10% rye, and 10% malted barley.

This product is available in: CA, ND, TX Unfortunately, we can't ship to PO Boxes and APO addresses. 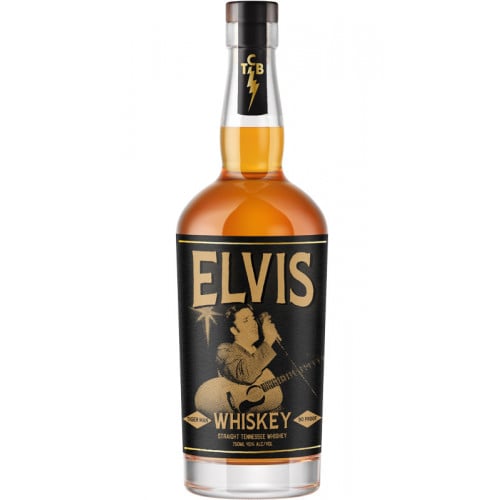 One such brand is Elvis Whiskey. "Elvis was one of the most significant cultural icons of the 20th century and continues to inspire his fans today," says Anttila. "We look forward to launching the brand, which is sure to be a highly sought-after collector’s item." The brand consists of 2 expressions, meticulously sourced & blended by a team of experts and industry veterans in Tennessee.

One of Elvis' many nicknames was "Tiger Man, the King of the Jungle" ― either given to him by his father or a fan. This straight Tennessee whiskey pays tribute to the legend. The 90-proof spirit is crafted with a mash bill of 80% corn, 10% rye, and 10% malted barley. It features notes of toasted oak, sweet corn, orchard fruit, and caramel.

The golden whiskey opens with aromas of toasted oak, sweet corn, apple, and citrus. The palate is sweet with toasted maple, crème brûlée, orchard fruit, and caramel, culminating in a long, soft, and sweet finish.