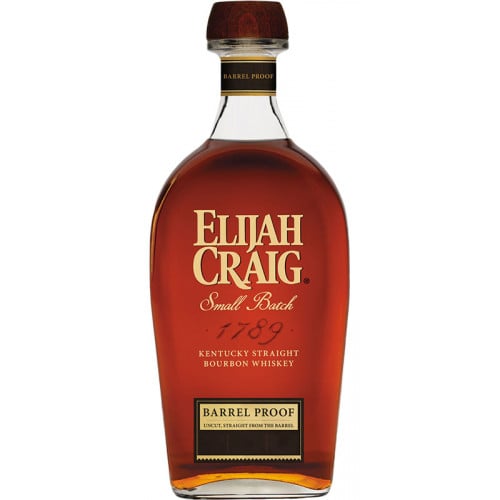 One year after the defeat of the British, a Baptist minister named Elijah Craig emigrated to Fayette County (today, a part of the State of Kentucky) and purchased 1,000 acres of land in a town named Lebanon. In 1789, Craig built a distillery on his farm and is credited with being the first person to mature bourbon in charred, oak casks, earning him the title "Father of Bourbon Whiskey." Elijah Craig has become a household name in the world of bourbon, and not without reason.

Made in the same tradition as Elijah Craig’s other award-winning bourbons, Barrel Proof is without a shadow of a doubt an essential experience for bourbon lovers: aged 12 years, uncut, straight from the barrel, and non-chill filtered. The proof for each barrel varies from batch to batch, making each bottle unique. The first letter of each batch number indicates which of that year’s releases the bottle was a part of. Beginning with “A,” the second digit determines the month the bottle was released, followed by the year. Typically released 3 times each year, Batch B521 was the second batch of 2021 that was released in May. Bottled at 118.2 proof, it offers a classic bourbon taste profile and a deceptively smooth drinking experience.

Grab a bottle of this classic barrel-proof bourbon today!

The nose opens sweet with caramel, candy, charred oak, and hints of nuts. The palate is sweet and oaky with brown sugar, toffee, and leather. The long finish is deceptively smooth with a balance of sweetness and spice with a lingering dark chocolate richness.