Size750mL Proof92 (46% ABV)
Aged for 19 years in new, toasted American oak casks, Glenmorangie Ealanta was named the 2014 World Whisky of the Year by Jim Murray's Whisky Bible.
Notify me when this product is back in stock. 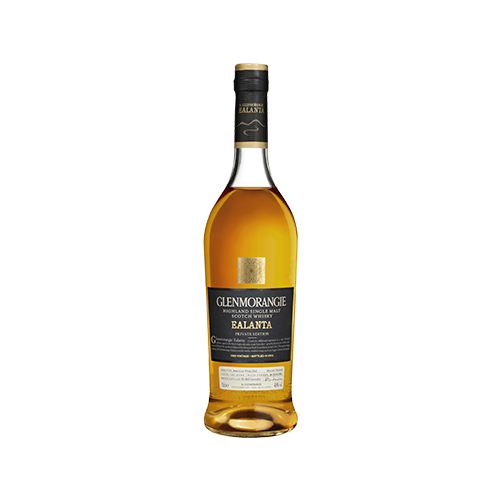 Following distillation, Glenmorangie Ealanta Single Malt Whisky was aged for 19 years in heavily toasted virgin oak casks. "Toasting just gives an altogether more subtle taste experience," says Dr. Bill Lumsden, Glenmorangie's Master of Whisky creation. Lumsden, who holds a Ph.D. in Biochemistry (he wrote his dissertation on yeast physiology) and is the only person in the world to have been honored with Whisky Advocate's "Industry Leader of the Year" award three times, is one of the most respected figures in the Scotch whisky industry. "Charred oak gives a large amount of flavor really quickly and while it may work beautifully for the oily, gutsy spirits distilled in Kentucky and Tennessee, it's not ideally suited for our rather refined and delicate Scottish spirit." As a result, Lumsden aged Ealanta exclusively in casks that were coopered from slow growth oak after being air-seasoned for just one year, as opposed to the traditional 18 to 24 months.

After the whisky was poured into the heavily-toasted casks, it was allowed to mature in Warehouse 3, one of Glenmorangie's dunnage-style warehouses, which is equipped with stone walls and damp floors. "Rather than driving the extractives out of the wood, which you would get in a typical Kentucky heated warehouse, this allows the flavors in the wood to be coaxed out very gently, and it develops a lot of complexity," says Lumsden.

Glenmorangie Ealanta was named the 2014 World Whisky of the Year by Jim Murray's Whisky Bible, with a score of 97.5 points — the highest score ever. Only a select number of bottles were made for the Private Edition collection.

Notes of toffee and butterscotch, along with a hint of nuts. Opens up to notes of ripe fruits, oranges and lemon before leading to a chewy, sweet finish accented by a touch of chocolate and vanilla.