Size750mL Proof111 (50.5% ABV)
Distilled in the spring of 2002 at Buffalo Trace Distillery, this bourbon was aged for an exceptional 18 years and 3 months. Bottled at 101 proof, the sour mash bill of this rare expression features Kentucky corn, Minnesota Rye, and North Dakota malted barley. 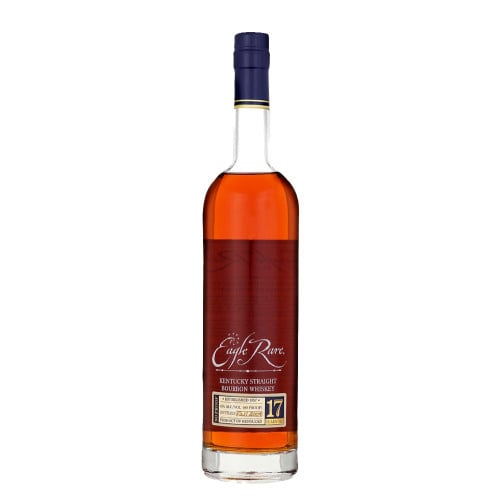 Produced by Buffalo Trace Distillery as part of the Antique Collection, Eagle Rare 17 Year Old Kentucky Straight Bourbon Whiskey honors the launch of the Eagle Rare Brand that dates back to 1974. Distilled in the spring of 2002, it was aged for 18 years and 3 months on the first floor of Warehouse P. Bottled at 101 proof, the sour mash bill features Kentucky corn, Minnesota Rye, and North Dakota malted barley. This rare and exceptionally old bourbon delights with a nose of ripe cherries, vanilla cream, and oak, which develop into caramel and coffee flavors on the well-balanced palate, rounded up by oak, pepper, and fresh herbs.

A warm nose of ripe cherries, vanilla cream, and oak. A well-balanced palate of caramel and coffee flavors blending with aged oak, dried fruits, and rye spice. Rounded up by oak, pepper, and fresh herbs on the finish.