Size750mL Proof90 (45% ABV)
Made from 100% locally-sourced soft, Washington winter wheat, this award-winning whiskey is aged in medium-charred American oak barrels for a minimum of two years.
Notify me when this product is back in stock. 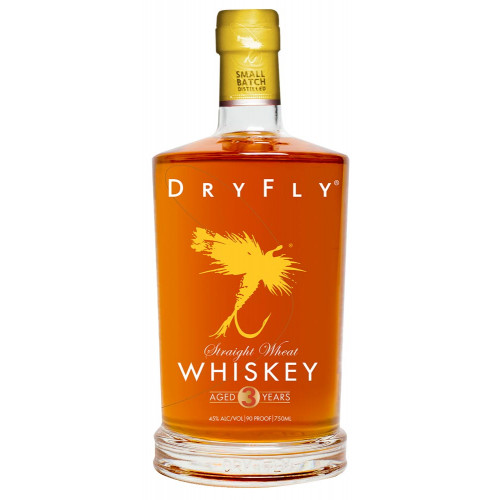 "The stills are the pretty part," says Don Poffenroth as he points to his twin, custom-designed 450-liter Christian Carl copper-pot stills. Manufactured in Goppingen, Germany, the stills traveled over seven thousand miles to Dry Fly Distilling's home in Spokane, Washington, and today, are used to make the distillery's award-winning Washington Wheat Whiskey.

Poffenroth and his co-founder, Kent Fleischmann, were inspired to open the doors to Dry Fly Distillery when they were knee-deep in the Gallatin River during a fly-fishing trip. "It was still early and the sun was rising slowly behind the alders," says Fleischmann. "It occurred to us how privileged we were to live, work, and fish in one of the most amazing places on Earth. We felt so fortunate that we wanted to find some way to share the natural beauty and purity of the great Northwest."

Dry Fly Washington Wheat Whiskey is made from 100% locally-sourced soft winter wheat. "We're in wheat country," says Fleischmann. "We have beautiful resources. That's why we utilize only local ingredients." Farmers from the Co-Ag Cooperative 25 miles north of Spokane ship bags of Washington winter-wheat to Dry Fly Distilling every other week.

After Poffenroth and Fleischmann receive the wheat, they mill and mash it before fermenting it in tanks located next to an electrocution-warning sign stamped in Russian Cyrillic. Following fermentation, the wash is distilled in the twin Christian Carl copper-pot stills before being aged in new, medium-charred American oak barrels sourced from the Bluegrass Cooperage in Tennessee. After aging the whiskey for a minimum of two years, Poffenroth and Fleischmann fill and seal each bottle by hand, noting its batch number and bottle number within the batch.

Dry Fly Washington Wheat Whiskey, which won the Gold Medal at the Whiskies of the World Competition in 2018, has a nose of buttery toast and sweet, smooth notes of biscuits and baked bread. Light yet surprisingly complex, it is the first whiskey made in Washington since Prohibition. "We are trying to challenge the norm," says Fleischmann. "We want to raise the bar and produce something memorable that keeps people coming back."

Challenge the norm and pick up a bottle of Dry Fly Washington Wheat Whiskey today!

Amber gold hue that creates a smooth layer when swirled in glass. Aromas of charred oak, toffee and toast. Initially smooth and sweet with notes of doughy bread and warm biscuits. Finish is long and smooth, with a spicy kick.