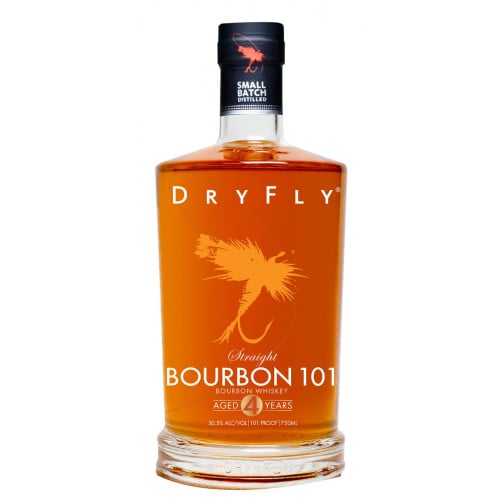 "The stills are the pretty part," says Don Poffenroth as he points to his twin, custom-designed 450-liter Christian Carl copper-pot stills. Manufactured in Goppingen, Germany, the stills travelled over seven thousand miles to Dry Fly Distillery's home in Spokane, Washington, and today, are used to make Dry Fly's line of craft spirits.

Poffenroth and his co-founder, Kent Fleischmann, were inspired to open the doors to Dry Fly Distillery when they were knee-deep in the Gallatin River during a fly-fishing trip. "It was still early and the sun was rising slowly behind the alders," says Fleischmann. "It occurred to us how privileged we were to live, work, and fish in one of the most amazing places on Earth. We felt so fortunate that we wanted to find some way to share the natural beauty and purity of the great Northwest."

Dry Fly Washington Bourbon 101 is made from a mash of 60% corn, 20% wheat and 20% barley. "All the ingredients for our bourbon were sourced locally from Washington," says Poffenroth. After mashing and fermenting the grains, Poffenroth and Fleischmann distill the wash through their twin Christian Carl copper-pot stills before maturing the bourbon in new, charred American oak casks. "Our bourbon has aged in full-sized, 53-gallon casks for three years," says Fleischmann.

The bourbon has a slightly spicy nose with notes of cinnamon, vanilla and oak. The entry has notes of caramel and toffee, that are balanced by notes of clove and allspice mid-palate. The finish is long and slightly sweet.

Slightly spicy aroma with notes of cinnamon, vanilla and oak. Entry has notes of caramel and toffee, that are balanced by notes of clove and allspice mid-palate. Finish is long and slightly sweet.