Size750mL Proof90 (45% ABV)
Award-winning Dry Fly Straight Port Barrel Finished Wheat Whiskey, made from 100% locally sourced wheat from Washington state, is aged for 3 years in American oak casks and transferred to port wine casks for an additional 9-12 months.
Notify me when this product is back in stock. 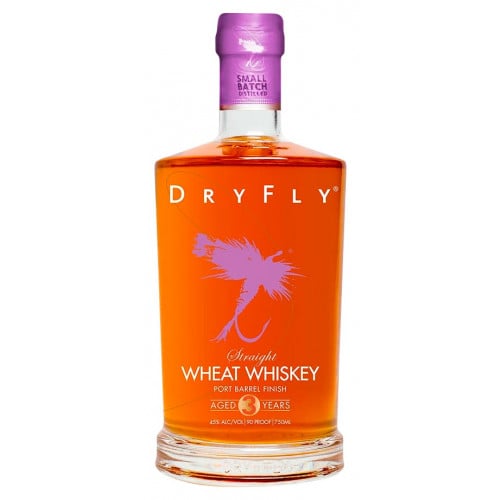 Dry Fly Distilling was founded by Don Poffenroth and Kent Fleischmann, two friends who were inspired to open its doors when they were knee-deep in the Gallatin River during a fly-fishing trip. "It was still early, and the sun was rising slowly behind the alders," says Fleischmann. "It occurred to us how privileged we were to live, work, and fish in one of the most amazing places on Earth. We felt so fortunate that we wanted to find some way to share the natural beauty and purity of the great Northwest."

In 2007, a law amendment allowed craft distilleries to open up in Washington State and Dry Fly was the first distillery to take advantage. It began producing small batch, wheat-based spirits, including gin, vodka, whiskey and bourbon, and while the vodka was the first to start garnering awards, the other spirits followed soon after.

Sustainability is an important value at Dry Fly, a grass to grain distillery, where they make it a priority to source the wheat from sustainable farms no farther than a 30-mile radius and to use natural botanicals, grown within the state. Dry Fly also doesn't take shortcuts when it comes to using state of the art equipment and traditional methods. "The stills are the pretty part," says Don Poffenroth as he points to his twin, custom-designed 450-liter Christian Carl copper-pot stills. Manufactured in Goppingen, Germany, the stills traveled over seven thousand miles to Dry Fly Distilling's home in Spokane, Washington, and today, are used to make the distillery's award-winning spirits.

Dry Fly Straight Port Barrel Finished Wheat Whiskey is made from 100% locally sourced wheat. First aged for 3 years in new, American oak barrels, the sweet wheat whiskey is then transferred to freshly dumped port wine barrels where it rests for an additional 9-12 months. Nothing unusual about finishing whiskey in wine, but there is something special about this one. Bottled at 90 proof, it's almost embarrassing how smoothly this one glides down your throat. Seeing the long list of its numerous awards it's not so surprising after all.

A copper hue. On the nose, it's vanilla with a touch of oak and citruses in the background. This same flavor profile is expected on the palate where the sweetness of wheat mellows into the sweetness of port wine. The finish is pleasant and sweet with a hint of spices.