Size750mL Proof90 (45% ABV)
Twice the age of the 10-year-old Eagle Rare, the name of this expression is a reference to both its age and the two eagle figurines ― one in the form of a stopper, the second within the luxurious bottle. Only 299 bottles were produced.
Notify me when this product is back in stock. 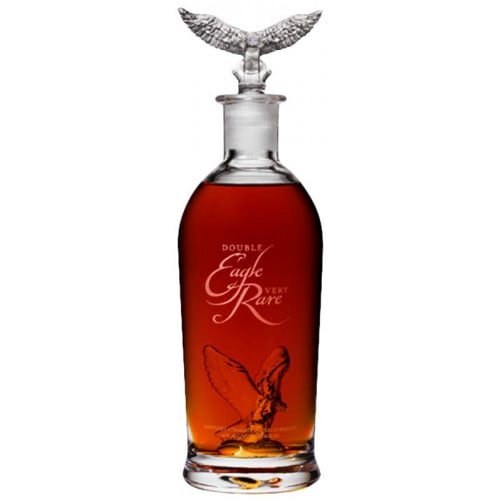 Eagle Rare 10 Year Old Kentucky Straight Bourbon Whiskey was matured for a minimum of ten years in new, American oak casks under the intense, Kentucky sun. As a result of its decade-long beauty rest, the bourbon has a golden honey color, along with an aroma of gentle toast, fresh tobacco, and bananas. The aroma gives way to notes of chocolate, almonds, melons, raisins, and dried fruits on the palate, which are complemented by a subtle vanilla undertone. The finish is long and fierce, with hints of roasted nuts and corn. Eagle Rare 10 Year Old earned a score of 96 points from Wine Enthusiast and 95 points from Robert Parker. In addition, the bourbon earned the Gold Medal at the 2013 International Wine and Spirits Competition, where it was named the "Best Bourbon."

The Double Eagle Very Rare is the oldest of Buffalo Trace's Eagles. At 20 years, it's double the age of the Eagle Rare. The name references both the age as well as the two glass eagle figurines ― one perched atop the bottle in the form of a stopper, the second within the luxurious hand-blown and individually-numbered decanter-style bottle. A true collector's item, this expertly-balanced expression is based on Buffalo Trace's high-rye mash bill and comes with a letter of authenticity. Only 299 bottles of this 90-proof whiskey were produced.

Get this ultra-premium limited-edition bourbon today!

Surprisingly balanced after two decades of aging, this bourbon has hints of vanilla, toasted oak, and caramel with a luxurious oakiness.