Learn more
Size750mL Proof80 (40% ABV) *Please note that the ABV of this bottle may vary
Available exclusively through Caskers, the world's only bourbon made from New Mexico blue corn is aged for a minimum of five years.
Notify me when this product is back in stock. 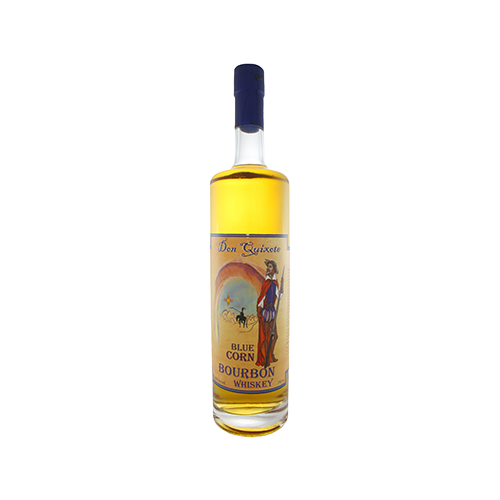 Situated along the eastern edge of the Jemez Mountains in the city of Los Alamos, Don Quixote Distillery is New Mexico's oldest operating distillery. The mountain range is actually composed of a group of volcanoes that erupted nearly 50,000 years ago and contributed to New Mexico's rich and fertile soil.

Don Quixote Blue Corn Bourbon Whiskey is made from a mash of 75% organic, New Mexican blue corn and 25% wheat. "I learned how to naturally malt my own grains from my grandfather," says Olha Dolin, Don Quixote's third-generation master distiller and one of only a handful of female distillers in the United States. "Naturally malting grains is a slow process that gently teases out the finer qualities of each kernel of corn during fermentation. It also lets me distill with wheat instead of barley, and keep that soft, robust flavor."

After Dolin mashes and ferments the grains, she distills the wash through a custom designed 250-gallon still. The still was specially designed and built by hand to operate in Los Alamos' high-elevation desert environment by Dolin's Ph.D. engineer husband, Ron, who was simultaneously employed at the Los Alamos National Laboratory. "Our distillation process produces a whiskey that is so gentle and smooth that we don't need to add any chemicals, unlike some other distilleries," says Olha Dolin.

Following distillation, the bourbon is aged for five years under the intense New Mexican sun in new, charred American oak barrels, before being finished in French oak barrels. The hot, dry days and cool, breezy nights constantly cause the bourbon to expand and contract while it matures, resulting in more contact with the wood. After the bourbon has aged, it is brought to proof with water from a glacial aquifer that is over 100,000 years old and is encased in volcanic pumice. The water is low in minerals and iron, and as a result, Don Quixote Blue Corn Bourbon has sweet hints of vanilla and caramel that play nicely with touches of oak and spice. The lingering finish is soft and smooth.

"Our simple distillation process process produces this incredible bourbon," says Dolin. "We don't use any aromatics or coloring or texturizing agents. We give you what God and nature gave us."

Sweet aroma with a touch of cinnamon. Initial flavor has touches of vanilla, honey and caramel that play nicely with hints of oak and spice. Lingering, soft finish.