This product is available in: CA, IL, NH, ND, TX Unfortunately, we can't ship to PO Boxes and APO addresses.

Size750mL Proof92 (46% ABV)
For this smooth and clean bourbon, two legends joined forces: the basketball superstar, 6-time NBA Champion and 2-time Olympic gold medalist Scottie Pippen and the famed wine and spirits maker Dave Phinney. Nothing short of spectacular.
Notify me when this product is back in stock.

This product is available in: CA, IL, NH, ND, TX Unfortunately, we can't ship to PO Boxes and APO addresses. 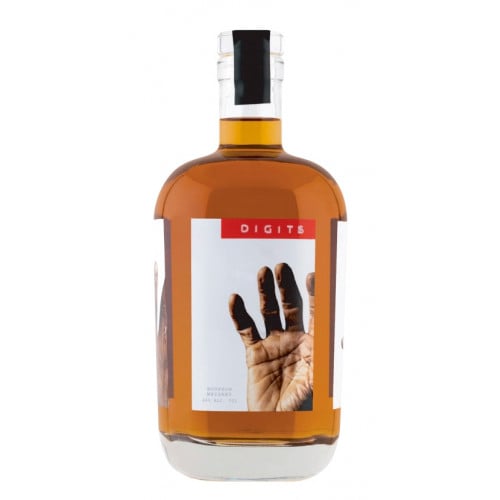 Initially only available in Chicago, this spectacular bottle is the fruit of a fantastic collaboration between two legends – the basketball superstar, 6-time NBA Champion and 2-time Olympic gold medalist Scottie Pippen who joined forces with the famed wine and spirits maker Dave Phinney.

Featuring a photograph of Pippen’s fingers on the label, Digits Scottie Pippen Bourbon Whiskey is a five-year-old bourbon whiskey, blended from the existing Savage & Cooke stock and tasted by Pippen. This smooth whiskey boasts an aromatic, clean and smooth palate with flavors of caramelized apples, brown sugar, and spice.

Phinney acquired his legendary status in Napa Valley with his flagship blend “The Prisoner” as well as by consulting for brands and producing wines from his vineyards across Europe and the U.S. In 2014, Phinney founded Savage & Cooke Distillery on Mare Island. Once upon a time one of the busies shipyards in the world, the distillery has revived the island’s former glory. Today, Savage & Cooke produces an acclaimed range of whiskeys, including Second Glance American Whiskey, The Burning Chair Bourbon, Lip Service Rye, and Bad Sweater Whiskey.

“My partnership with Dave Phinney has been remarkable from the start and I believe we have created a superb bourbon. We wanted DIGITS to be more than a bourbon, we wanted it to be a reminder of who we are individually and how we came together to create this bottle. I’ve always celebrated with bourbon, now getting to celebrate with my own is something very special to me,” said Pippen.

Smooth and clean from beginning to end, this whiskey opens up with an aromatic nose, while the palate brings flavors of caramelized apples, brown sugar, and spice.