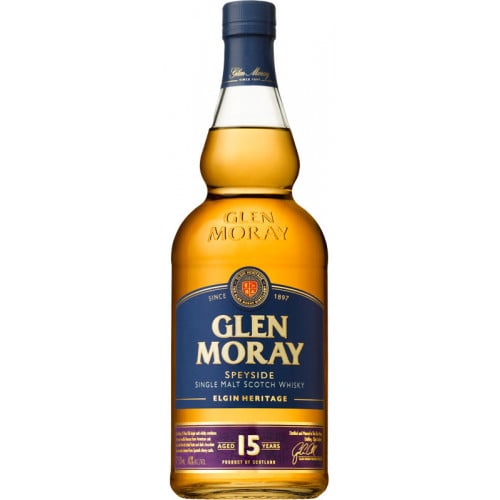 Glen Moray 15 Year Old brings together two classic Single Malts from Glen Moray. First, you’ve got Glen Moray Single Malt that’s aged a full 15 years in ex-Bourbon barrels. Then, you’ve got that same Single Malt but this one is aged a full 15 years in Oloroso Sherry casks. In terms of flavors, this means a fusion of the citrusy-oily-rancio notes with apple, apricot, and grain notes. Perfectly balanced, this one is best savored neat, on the rocks, or with a few drops of water.

Medium amber hue. The nose opens up sweet with aromas of chocolate caramels with toasted oak and dried cherries. The palate brings almost a Rum-like hint of bananas and raisins that complement the notes of dark chocolate creams, apricot, and granola. The finish fades into notes of Christmas spices.