Size750mL Proof90 (45% ABV)
Devil Rivers Bourbon has earned five gold medals including "Best Bourbons 10 Years and Younger" at the 2017 Los Angeles International Spirits Competition, and 2017 New York's Top Fifty.
Notify me when this product is back in stock. 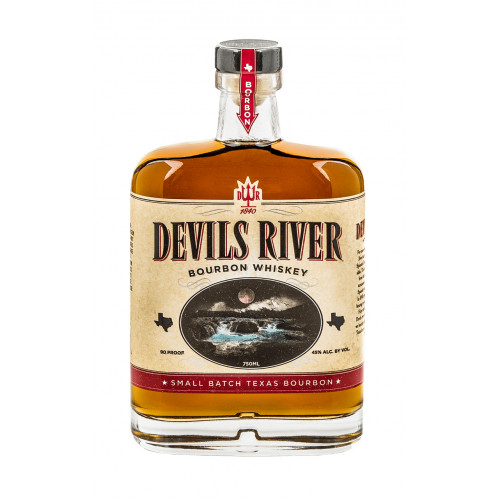 Based out of Frisco, Texas, Devils River Whiskey was founded by Mike Cameron, co-founder of Rebecca Creek Whiskey, and president of the Texas Distilled Spirits Association. Their 90-proof bourbon is crafted from the pure Devils River spring waters. Texas Ranger John Coffee Hays named this great waterway the "Devils River" in 1840. The naturally-filtered limestone spring water is considered the purest water in Texas.

In college, Cameron would take frequent trips to the feisty Southwest Texas river, the tributary of the Del Rio that would inspire the name of his new whiskey label. Devil’s River whiskey is distilled using a signature method, in traditional copper pot stills designed for distilling complex, flavorful, dark spirits.

The Bourbon is crafted from a high-rye proprietary blend of meticulously selected grains, giving the spirit its warm, golden notes. The grains are distilled with proprietary yeast strains designed to boost its bold flavors. The mash is then distilled in traditional copper pot stills and combined with the pure, iron-filtered, limestone-filtered spring water of the whiskey’s namesake, before being aged in dark #4 charred oak barrels. This dark char enhance the bourbon’s deep amber colors and bolster its sweet flavors.

Big bold notes, followed by an oak, honey and caramel medley. The finish is smooth with a warm, sweet flavor.