Size750mL Proof94 (47% ABV)
Del Maguey San Luis del Rio Azul mezcal is made with maguey Azul, which is traditionally used in tequila. This award-winning expression is handcrafted at the palenque of the Cruz Nolasco family in the village of San Luis Del Rio, using traditional methods. 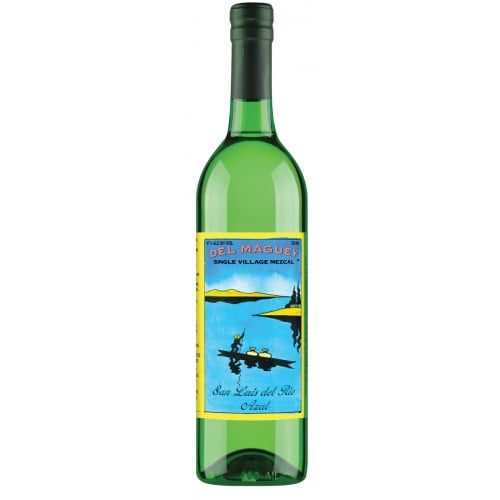 Del Maguey, Single Village Mezcal was founded in 1995 by Ron Cooper, who wanted to introduce the world to previously unavailable artisanal mezcal produced the original handcrafted way. Through deep relationships with indigenous producers in Oaxaca and Puebla, Mexico, Del Maguey protects and preserves the ancient production processes that have been passed down for generations. These traditional methods, combined with the diverse micro-climates and terroir of Mexico, give each creation its own unique, rich, sweet and smoky character that celebrates the art of each family producer. Every product in the brand’s range is made by individual family palenques. The brand has been part of the portfolio of the international spirits company Pernod Ricard since 2017.

The expressions in the Del Maguey, Vino de Mezcal Series are hand selected by the founder, Ron Cooper. They are produced in very limited quantities from select wild and cultivated varietals. Before the notion of mezcal or tequila as spirits categories, agave based spirits from anywhere in Mexico were traditionally referred to as vino de mezcal. The first mention of tequila as a beverage is in the town of Tequila’s tax record of 1873, which contains an entry showing that three barrels of mezcal wine from the region of Tequila were sent to Santa Fe, New Mexico.

Del Maguey San Luis del Rio Azul is made with maguey Azul (maguey is a common Oaxacan word for agave), which is traditionally used in tequila. These agaves were brought by Jalisco truckers, who came down to purchase Espadin in order to sustain tequila production during the agave scarcity in Jalisco 2000–2004. The mezcal is produced at the palenque of the Cruz Nolasco family in the village of San Luis Del Rio. The blue agave is harvested after growing 7–10 years. The agave hearts are roasted for 3–8 days, and the mezcal is slowly twice distilled in a copper still after a 6–8-day fermentation.

The spice and fruit on the nose carry on to the palate, which also has notes of smoke and herbs. The finish is long and creamy.