Size750mL Proof84 (42% ABV)
This single malt is is produced onsite, dubbed “The Control,” this unsmoked whiskey is modeled after traditional Highland and Speyside single malts.
Notify me when this product is back in stock. 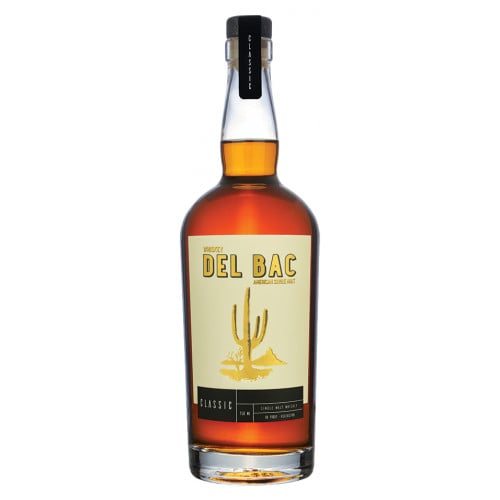 Del Bac was conceived while Stephen was drinking Scotch and barbecuing with mesquite scraps from his custom furniture company. The idea was born to malt barley over mesquite instead of peat. The result was a signature whiskey embodying the spirit of the American Southwest terroir. The unique whiskey was initially distilled using a 5-gallon alembic pot-still from Portugal. While perfecting the production process he learned how to malt barley, initially using a 6-row cattle-feed barley sourced from nearby Coolidge, AZ, later sourcing 2-row malting barley from Southern Colorado.

After graduating with a 40-gallon pot-still in 2011. Stephen and his daughter Amanda incorporated Hamilton Distillers in 2011. They expanded and re-vamped their facility incorporating a 500-gallon distillery and malt house to malt 5,000 lb batches using a tank system to steep, germinate, and dry the malt between two tanks, a system that allows for more control, yielding a better quality malt.

This whiskey is a true American Single Malt, finished using Scottish methods of whiskey-making. Del Bac Classic is handcrafted from a 100% barley malt that is mashed, fermented, copper pot distilled, aged and bottled on site. You can expect opening notes of bright stone fruits, balanced by a sweet caramel and oak finish.

Caramel, molasses and marzipan on the nose, and ripe stone fruits up front on the palette, followed by a spice and honey finish.