Size750mL Proof90 (45% ABV)
This high-rye bourbon is aged in large oak barrels forged by Missouri coopers.
Notify me when this product is back in stock. 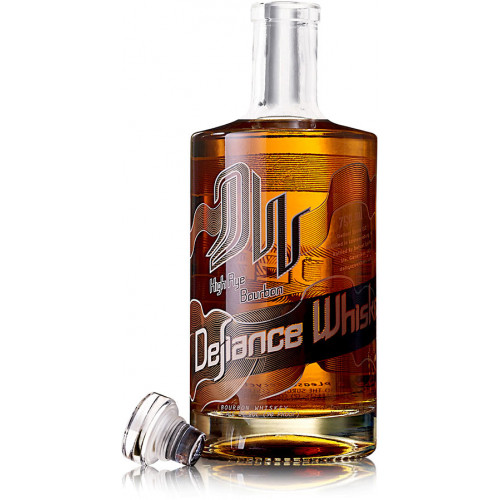 Named after his great aunt, Cornelia, who was a World War II Pilot and the first such female in American History to die on active duty, Defiance Whiskey is the true embodiment of Daniel Fort’s defiant attitude and passion, which has run in the family for generations.

In partnership with his father, Garth (a chemical engineer), Daniel leveraged his business savvy to distill Defiance Whiskey via Midwest Grain Products in Lawrence, Indiana, while ensuring the end product ultimately remains craft and entirely-unique to his native Missouri. “Also, my wife told me I could not quit my day job, nor put a pot still in our basement,” says Daniel.

The Forts selected a high-rye mashbill for their bourbon (the recipe also includes corn and barley), and age the juice in large oak barrels forged by Missouri coopers. According to Daniel, “If you like good whiskey, you should hug a Missouri cooper, because a good percentage of the world's whiskey barrels are put together by coopers here in Missouri.” The Forts individually sample each barrel before blending and bottling Defiance Whiskey, also paying close attention to the water used to bring the bourbon to proof at 45% ABV.

As a result of this careful process, Defiance High Rye Bourbon Whiskey has a spicy aroma of cloves, walnuts and buttered toast, which leads to a softer palate filled with mild cinnamon, peaches and candy bar. The finish is subtle and sweet, with slight hints of orange, cherry and vanilla.

At under $40, this whiskey is a fantastic value — pick up a bottle today!