Learn more
Size750mL Proof92.6 (46.3% ABV) *Please note that the ABV of this bottle may vary
This 18-year-old Whisky, finished in first-fill bourbon casks, was awarded Gold at the 2015 Scotch Whisky Masters.
Notify me when this product is back in stock. 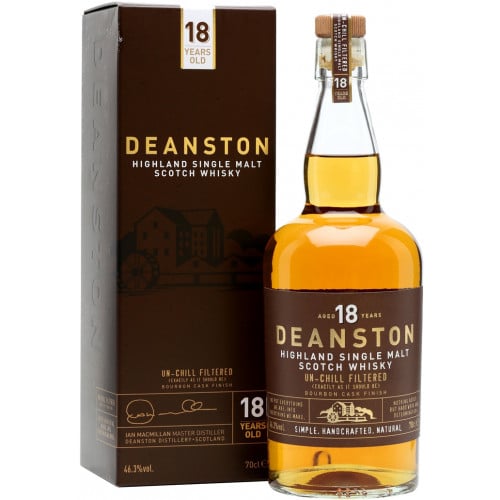 Deanston Single Malt Whisky is made using Scottish-grown barley that is grown without the use of pesticides or chemicals. After the barley is mashed and fermented in an 11-ton open-topped mash tun — the only one of its kind in Scotland — it is twice distilled through Deanston's copper pot stills. The stills are equipped with a sloping lyne arm and boiler ball, which helps ensure a lighter and smoother Whisky.

Following distillation, Deanston 18 Year Old Bourbon Cask Finish Highland Single Malt Scotch Whisky is aged for nearly two decades in the cellars of the former cotton mill. The cellars maintain a constant temperature and humidity, causing Whisky expert Jim Murray to remark that “Deanston is a cathedral to Whisky maturation. In fact, with its gloriously vaulted ceiling, you would swear you were in a crypt.” After its initial beautyrest, the Whisky is finished in first-fill bourbon casks sourced from the United States, which contribute notes of charred wood and honey to the Whisky.

Deanston 18 Year Old Bourbon Cask Finish Highland Single Malt Scotch Whisky has an alluring aroma of clover, toffee and caramel, which leads to a palate filled with notes of cherry, raisins, dark chocolate and saltwater taffy. The finish, smooth and complex, is complete with hints of butterscotch, oak, malt cereal and blackberry.

This fantastic Whisky, which won Gold at the 2015 Scotch Whisky Masters, is sure to become a hit.

Alluring aroma of clover and toffee, which leads to a palate complete with sweet notes of cherry, raisin, dark chocolate and saltwater taffy. The finish, smooth and complex, is complete with hints of caramel, oak, malt cereal and blackberry.