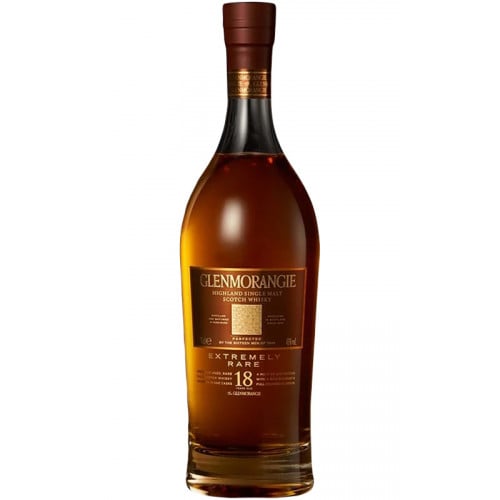 After distillation, Glenmorangie 18 Year Old Extremely Rare Single Malt Scotch Whisky is aged for fifteen years in used bourbon casks. Approximately 30% of the whisky is then double-barreled, or finished, in Spanish Oloroso sherry casks for an additional three years. After both the original and double-barreled whisky have reached 18 years of age, they are blended together in order to create Glenmorangie 18 Year Old Extremely Rare Whisky.

Glenmorangie's 18 Year Old Extremely Rare "embodies our house style," says Dr. Bill Lumsden, Glenmorangie's Head of Distilling and Flavor Creation since 1998. Lumsden, who holds a PhD in Biochemistry (he wrote his dissertation on yeast physiology) and is the only person in the world to have been honored with Whisky Advocate's "Industry Leader of the Year" award three times, is one of the most respected figures in the Scotch whisky industry. "It develops and fills out the characteristics of the 10 Years Old, adding another dimension," he says of the 18 Year Old expression, "but it remains true to its origin."

Notes of mandarin, banana, apple and pear. Well-textured, flavors open up to notes of apricots, nuts and vanilla, along with hints of raisins and fudge. Finish lingers with a touch of almonds and sweet citrus.

2.7 out of 5
(1 reviews)
Write a review
Real email address is required to social networks
Sign in
Login with Google
Login with Facebook
Or
We also recommend