Learn more
Size750mL Proof84 (42% ABV) *Please note that the ABV of this bottle may vary
Aged for a minimum of four years, this Rhum earned a score of 91 points from the Beverage Testing Institute (2013).
Notify me when this product is back in stock. 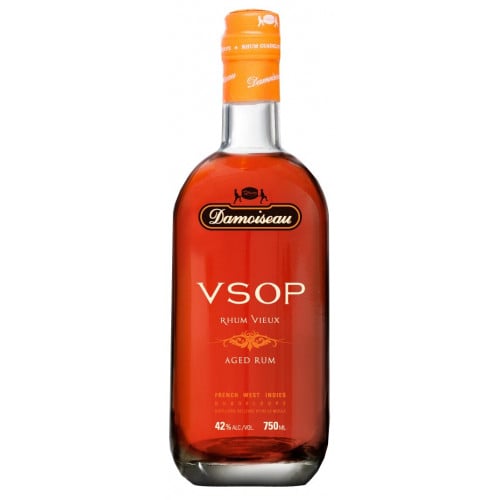 Damoiseau VSOP Rhum Agricole is a Rhum agricole crafted on Guadeloupe, a group of Caribbean islands in the Lesser Antilles. The Rhum is crafted exclusively from the first pressing of fresh sugarcane that is harvested in Guadeloupe. "This process is inspired by the enjoyment of great brandies, particularly Armagnac," says Hervé Damoiseau, the grandson of the distillery's founder and its current master distiller.

After the sugar cane is pressed, it is fermented and distilled before the remaining Rhum is matured in American oak casks that were previously used to mature bourbon. During maturation, the intense heat and humidity in Guadeloupe cause a portion of the aging Rum to evaporate. "It is called "la part des anges," says Damoiseau, which translates to "angel's share." "Two liters of white Rhum are required to get one liter of 10 years aged Rhum."

Damoiseau VSOP Rhum Agricole has a warm amber hue, along with an aroma of roasted fruits, spices and citrus. The aroma gives way to notes of charred sugarcane, roasted peppers and tropical fruits (particularly bananas and coconuts) on the palate, and leads to a finish accented by notes of oak spices, black pepper and salted caramel.

Damoiseau VSOP earned a score of 91 points from the Beverage Testing Institute (2013), which called it "superb."

Warm amber hue, along with an aroma of roasted fruits, spices and citrus. Notes of charred sugarcane, roasted peppers and tropical fruits (particularly bananas and coconuts) on the palate. Finish accented by notes of oak spices, black pepper and salted caramel.