Size750mL Proof95 (47.5% ABV)
This farm-to-bottle spirit is the first straight rye to be crafted in Pennsylvania in more than a quarter of a century. Bottled by hand at 95 proof, it features a classic pre-Prohibition flavor profile. 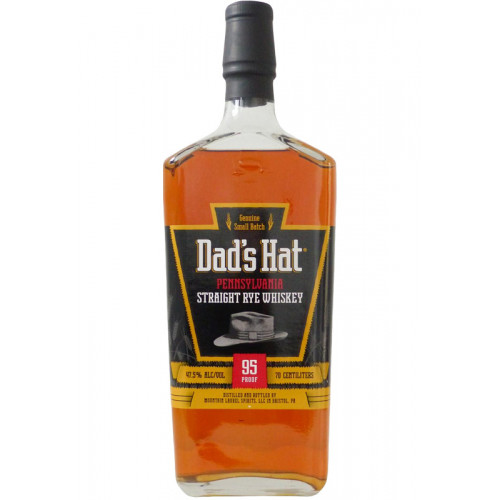 "Dad's Hat Pennsylvania Rye Whiskies pay homage to our state's rich tradition of making small-batch whiskey," says Herman Mihalich, master distiller at Mountain Laurel Spirits. Raised in Monessen (a small city situated in southwest Pennsylvania) and armed with a Bachelor's degree in Chemical Engineering from the University of Pennsylvania and an MBA from Wharton, Mihalich has spent most of his life in Pennsylvania. "I really wanted to revive that entrepreneurial spirit and rich rye heritage we have here," he says. Inspired by the old-fashioned fedora hats his father used to purchase in Philadelphia, Mihalich's goal was to recreate the sentiment that these hats represented with Dad's Hat Whiskey: quality, tradition, and integrity.

Dad's Hat Rye is made from a mash of 80% rye, 15% malted barley, and 5% malted rye. After Mihalich sources all of the grains from local farmers in Pennsylvania, he slowly ferments the mash for approximately seven days before distilling it through a 500-gallon Christian Carl copper pot still imported from Germany. The still, which is augmented by a side-column, allows Mihalich to remove any impurities in the whiskey, while simultaneously refining its flavor and texture. After distillation, the whiskey is aged in charred, white oak quarter casks (15-gallon casks) in a temperature-controlled warehouse. The small casks and climate-controlled aging give the whiskey hints of cinnamon, dried fruits, nuts, and candied apple, which nicely balance out the flavor of the spicy rye.

Dad's Hat Straight Rye is bottled by hand at 95 proof after being aged for at least 4 years. It's the first straight rye to be crafted in Pennsylvania in more than a quarter of a century. The farm-to-bottle spirit is deep and complex with the characteristic rye spice notes balanced by burnt sugar, vanilla, and fruit.

Get your bottle of this straight rye today!

It's a deep and complex straight rye with rye grass, caramelized sugar, and hints of vanilla on the nose. The palate is layered with pepper, cinnamon, green apple, fig, and dark chocolate, culminating in a satisfyingly long finish.