Size750mL Proof90 (45% ABV)
Born in Kentucky, this bourbon was aged for five years in San Francisco.
Notify me when this product is back in stock. 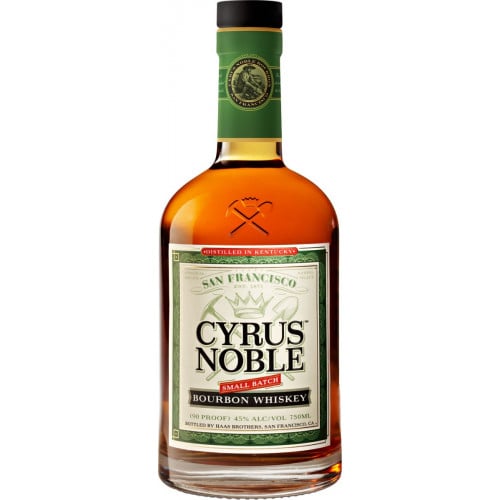 After a failed attempt to strike it rich during the California Gold Rush, Cyrus Noble returned to his native Ohio and took work at the Freiberg-Workum Distillery, situated near the Ohio River.  After years of studying and hard-work, Noble was promoted to superintendent of the distillery and began perfecting the craft of distilling small-batch spirits.

Noble not only enjoyed producing bourbon, he also enjoyed consuming it. While the exact circumstances remain unknown, rumor has it that, while intoxicated one day, Cyrus was experimenting with a new recipe for bourbon, when he slipped and fell into a vat of whiskey. In 1871, the distillery appropriately commissioned the new bourbon under his name. The smooth bourbon found its way into saloons across the Western frontier, and was enjoyed by both men and women who shared a common spirit of adventure, and possessed the ingenuity and wherewithal to help settle the booming west.

Made from a mash of 75% corn, 17% rye and 8% malted barley, Cyrus Noble Bourbon Whiskey is born in Kentucky and aged for five to six years in American white oak barrels in San Francisco.  With notes of caramel, hazelnut, and toffee, each bottle reflects the spirit and character of a hand-made, intimate whiskey.

Have a toast to your own success with a bottle of Cyrus Noble today!

Aroma of vanilla, butterscotch and roasted cashews. Notes of caramel, butterscotch, hazelnut and toffee on the palate. Finish of sweet citrus, ginger and cloves.