Caskers Rewards members earn up to 18 store points back when buying this bottle.
Size750mL Proof80 (40% ABV)
Made using a secret recipe, this whisky was crafted in honor of Crown Royal's 75th anniversary.
Notify me when this product is back in stock.

Caskers Rewards Caskers Rewards members earn up to 18 store points back when buying this bottle. Learn more
Out of stock
Skip to the end of the images gallery 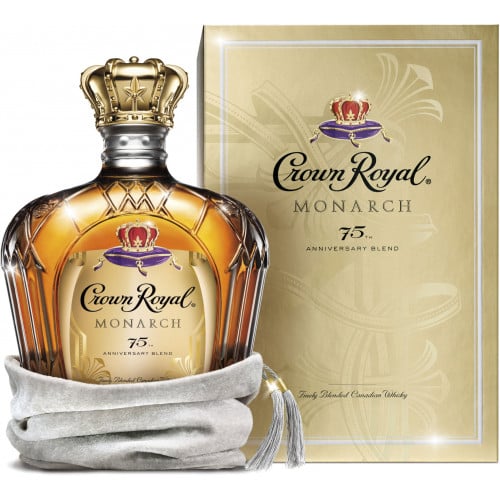 Today, Crown Royal Monarch 75th Anniversary Blend commemorates both the arrival of the King and Queen to North America, and Crown Royal's 75th anniversary. "Crown Royal was originally created for royalty, crafted over time and the fact that the whisky is still being enjoyed 75 years later is really special to all of us at Crown Royal," says Andrew MacKay, the master distiller at Crown Royal.

Crown Royal Monarch 75th Anniversary Blend is a unique blend of whiskies produced by Crown Royal, and includes a special whisky from the historic Coffey rye still, residing in Manitoba. The whisky has an aroma of oak, sweet caramel, rye and maple syrup. The aroma gives way to an exceptionally smooth flavor profile, with touches of oak spice, black pepper, clove, dark roasted coffee, espresso and milk chocolate. The balanced flavors lead to a finish that is only slightly spicy.

The whisky is "one of the best crafted spirits from Crown Royal"and showcases "everything we love about Canadian whisky,"according to Drink Spirits. "We're excited to share this special limited edition blend with consumers," says MacKay, "and look forward to celebrating many more years of unmatched whisky." Pick up a bottle today!