Size750mL Proof95 (47.5% ABV)
Heather Manley's Crooked Water crafts modern spirits with help from the award-winning Yahara Bay Distillery in Madison, WI. This expression is a 100% rye whiskey that is initially matured for 2 years in oak casks before being finished in rum barrels from Barbados.
Notify me when this product is back in stock. 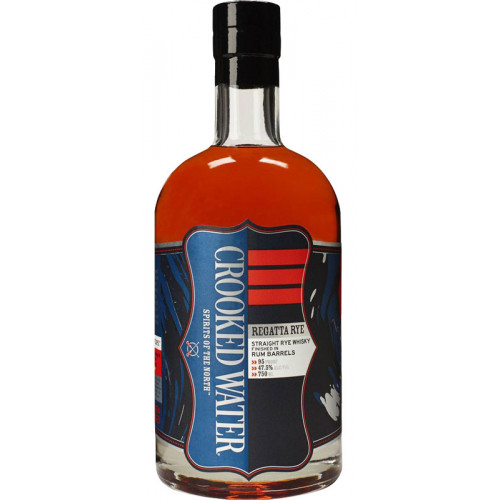 When Heather Manley formed Crooked Water in 2013, she was searching for a venture that would allow her to express her passion for spirits and innovation. She partnered with the award-winning Yahara Bay Distillery in Madison, Wisconsin, soon releasing Kings Port, a port cask-finished bourbon. Soon, the lineup grew to include several expressions of modern and innovative spirits that include bourbon, rye, vodka, gin, brandy, liqueur, and ready-to-pour cocktails. Regatta Rye is a straight rye whiskey that is initially matured in oak casks for 2 years before being finished in rum casks from Barbados. Bottled at 95 proof ― Crooked Water always strives for higher-proof spirits ― it's a deliciously spicy expression that invokes days spent at sea.

It's an aromatic rye whiskey with oak, rye spice, and hints of sea breeze. It's pleasantly sweet and spicy on the palate with rye, citrus zest, fruit, and a touch of brine. The finish is complex, long, tannic, and smooth.