Size750mL Proof70 (35% ABV)
A partnership between American rapper Yelawolf and Next Century Spirits, this award-winning cinnamon-flavored expression cuts their flagship bourbon down to 70 proof and adds an extra-spicy kick into the mix.

This is a PRE-ORDER. Bottles will be shipped in 2nd half of June.
Notify me when this product is back in stock. 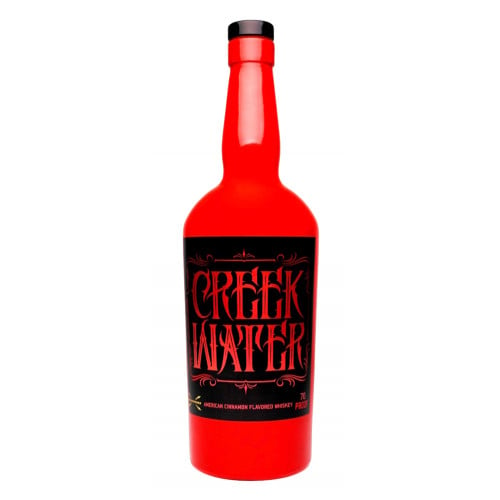 American rapper and independent record label owner Yelawolf has worked with some of the brightest stars in the music industry, including Eminem, Kid Rock, Travis Barker, and Ed Sheeran. He has recently partnered with Next Century Spirits to launch the Creek Water Whiskey brand for fans and whiskey lovers alike.

The artist's down-to-earth style and lyrics deal with the gritty rural everyday life which embraces the core of America, blemishes and all. The whiskey channels this same outlook, and the Durham, North Carolina distillery provided the perfect spirit. It's a state-of-the-art distillery that combines tradition with science, producing authentic hand-crafted spirits, maturing them in wooden casks, and employing a patented proprietary finishing process that speeds up the maturation.

Their first release was the award-winning 100-proof Creek Water Whiskey, crafted from a bourbon mash of 75% corn, 21% rye, and 4% malt. It has an honest bourbon profile with tobacco, maple syrup, cinnamon spice, and oak notes. The Cinnamon Flavored Whiskey expression is limited to 1500 cases and cuts the flagship down to 70 proof. It adds a cinnamon infusion to the mix for an extra spicy kick that's perfect for cocktails or sipping. Each pre-order comes with a Creek Water Whiskey bandana.

Building on the 100-proof whiskey, this expression takes away some heat and adds a spicy cinnamon kick to the profile that has notes of baking spice and vanilla on the nose. Brown sugar, honey, and cinnamon enter on the palate and give way to a finish with a lingering heat, toasted oak, and dark chocolate notes.