Caskers Rewards members earn up to 2 store points back when buying this bottle.
Size750mL Proof90.5 (45.25% ABV)
This limited release, which was bottled for the famous Corti Brothers of California, was double-barrelled in Mission del Dole casks from Harbor Winery.
Notify me when this product is back in stock. 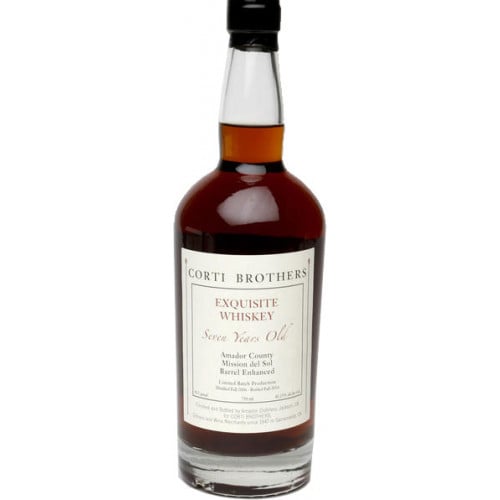 Corti Brothers Exquisite Whiskey is crafted from just 13 casks of seven year old, Kentucky bourbon whiskey that has been made with a mashbill of 70% corn, 25% rye and 5% malted barley. After seven years of maturation in these new, American oak casks, the whisky is then finished in barrels which previously housed Harbor Winery’s Mission del Sole. This practice of “double-barreling” is common for Scotch whiskies, but relatively unusual for a bourbon whiskey. Afterwards, the whiskey is un-chill filtered and bottled at 90.5 proof.

Corti Brothers Exquisite Whiskey has a nose of port and caramelized brown sugar, which leads to a palate filled with bright fruits, port, sherry and oak. The finish is rich and sweet, with more oak and a nice earthy character that lingers.

This incredibly unique whiskey is a one-time release which will not be around long — pick up a bottle (or two) today!

Nose of port and caramelized brown sugar, which leads to a palate filled with bright fruits, port, sherry and oak. Finish is rich and sweet, with more oak and a nice earthy character that lingers.