Size750mL Proof100 (50% ABV)
Wildfire is Corsair’s very first “grain to glass” whiskey, crafted from barley grown, malted, and smoked at a rural Tennessee farm in Bell’s Bend.
Notify me when this product is back in stock. 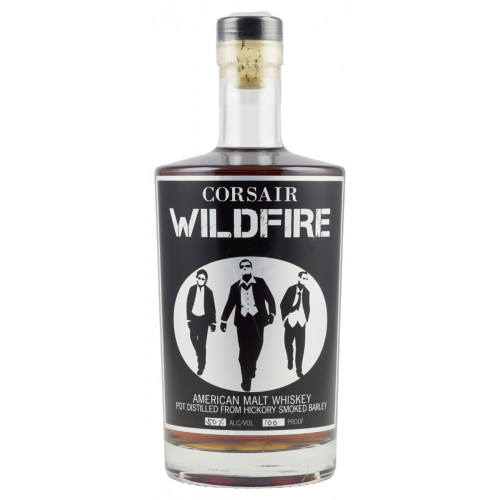 "I'm an avid whiskey lover," says Darek Bell, master distiller at Corsair Artisan Distillery in Kentucky, "but I do think whiskey could be better. Different. More interesting. More imaginative". Bell, a graduate of the Bruichladdich Distilling Academy in Islay, Scotland, is a mad scientist and a notoriously experimental distiller. Since opening its doors in 2009, Corsair Artisan Distillery has received numerous accolades and awards, including being named the 2013 Craft Distillery of the Year and 2013 Innovator of the Year by Whisky Magazine.

Wildfire is Corsair’s very first “grain to glass” whiskey, crafted from barley grown, malted, and smoked at a rural Tennessee farm in Bell’s Bend. Wildfire is 100% hickory-smoked, which gives it a unique flavor profile and smooth mouthfeel. Launched in 2015 Wildfire has quickly become one of our most popular whiskeys.

Hickory smoke is most commonly associated with a good Southern barbecue, whose flavors are fully expressed in this whiskey. Light smoke, caramel, and butterscotch come forward on the nose. The overall flavor is of smoky barbecue; savory with surprising hints of spice with full body and rich mouthfeel.