Learn more
Size750mL Proof100 (50% ABV) *Please note that the ABV of this bottle may vary
Made from a mash bill of malted oats, coffee malt and 6-row barley and double distilled, this isn't an ordinary oat whiskey. A superb and balanced dram of sweet and savory flavors, it's bottled at 100 proof. Rich and dynamic.
Notify me when this product is back in stock. 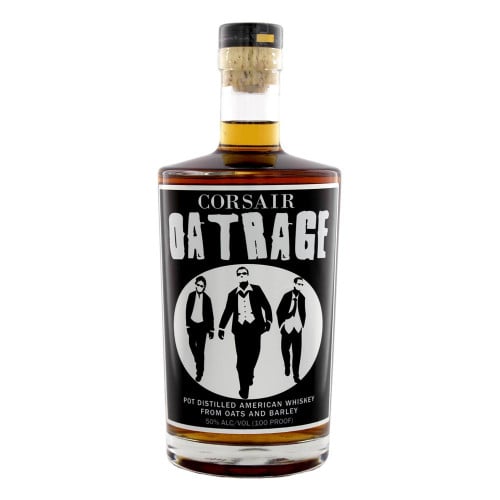 The story behind Corsair Distillery is a story of a long-lasting childhood friendship. Darek Bell and Andrew Webber began homebrewing beer and wine in Darek's garage, but soon realized that it would actually be more fun to make whiskey. After intensely studying distilleries and spirits, the pair opened the doors to Corsair Distillery in 2008 in Bowling Green, Kentucky and this is how Nashville got its first craft distillery since prohibition. International awards and publications came flooding in soon after with magazines such as Whisky Magazine, Whisky Advocate, the Atlantic and Time Out New York praising Corsair spirits. Corsair Distillery was named the 2013 Craft Distillery of the Year and 2013 Innovator of the Year by Whisky Magazine.

Never ones to make whiskey like everyone else, their oat whiskey is no plain oat dram. Rather, it's oat-rageous as they call it. Darek Bell crafted a mash bill of malted oats, coffee malt, which is typically used for beer brewing, and 6-row barley. Distilled twice and aged for several months in new charred oak, it's bottled at 100 proof. Oat-rageously balanced, expect plenty of sweet notes, kept in check by the savory and rustic notes. Enjoy this rich and dynamic whiskey on its own or in a whiskey sour with a twist.

Copper hue. Sweet aromas of vanilla bean, brown sugar, banana, balanced with nuts and some spice. Flavors of maple, cinnamon, vanilla, nuts, malt syrup and chocolate on the palate. The finish is long and layered.