Size750mL Proof92 (46% ABV)
Distilled from malted barley and flavored with hops, this limited edition whiskey represents a new experiment from one of the most adventurous craft distilleries. 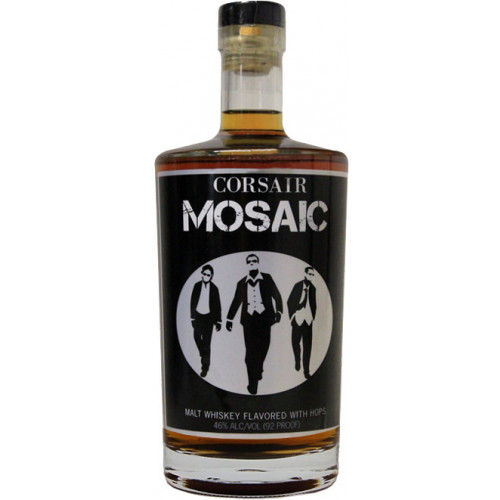 “I’m an avid whiskey lover,” says Darek Bell, master distiller at Corsair Artisan Distillery in Kentucky, “but I do think whiskey could be better. Different. More interesting. More imaginative.” Bell, a graduate of the Bruichladdich Distilling Academy in Islay, Scotland, is a mad-scientist and a notoriously experimental distiller. Since opening its doors in 2009, Corsair Artisan Distillery has received numerous accolades and awards, including being named the 2013 Craft Distillery of the Year and 2013 Innovator of the Year by Whisky Magazine.

Corsair Mosaic Malt Whiskey is a whiskey distilled from malted barley and flavored with hops. Our “experiments and tasting competitions taught us that Mosaic hops were some of the best hops possible,” says Bell. Mosaic Hops were developed in 2012 and boast an alpha acid rating of 11.5%-13.5%, contributing floral, tropical and fruity notes to the whiskey. As a result of these hops, Corsair Mosaic has an aroma of rose petals, coconuts and papaya that gives way to notes of mango, citrus, earthy pines and herbs.

Corsair Mosaic is a limited edition whiskey. Pick up a bottle today!

Aroma of rose petals, coconuts and papaya that gives way to notes of mango, citrus, earthy pines and herbs.