Learn more
Size750mL Proof92 (46% ABV) *Please note that the ABV of this bottle may vary
Distilled from malted barley, each of these whiskeys is flavored with a unique varietal of hops often used to brew craft beer.
Notify me when this product is back in stock. 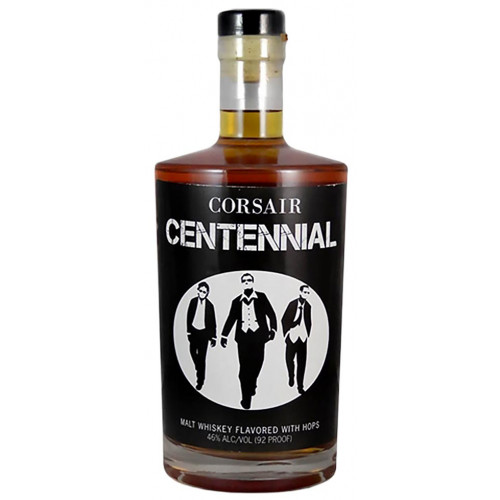 Corsair Centennial Malt Whiskey is a whiskey distilled from malted barley and flavored with hops. Our "experiments and tasting competitions taught us that Centennial hops were some of the best hops possible," says Bell. Centennial Hops were first created in 1974 and boast an alpha acid rating of 9.5%-11.5%, resulting in a slightly floral flavor profile that is ideal for making pale ales and India pale ales. After Corsair Centennial Malt Whiskey is distilled with the hops, it is aged in new, American oak casks until it reaches its peak flavor. As a result, the whiskey has a sweet aroma, with touches of rose petals and orange zest. Notes of caramelized oranges and sweet malt dominate the flavor profile, and lead to a finish accented by balanced hops and sweet citrus.

"We are a small distillery, but we have big dreams," says Bell. "Our goal from day one has been to distill the best whiskey in the world," he adds, noting that Corsair has won 74 different medals in the past six years.

Pick up this amazing Whiskey today!

Sweet floral aromas of roses, orange citrus, and malt on the nose. The palate features flavors of caramel, oranges, and grain with just a hint of spice. The finish is medium length with sweet notes and orange zest.