Size750mL Proof80 (40% ABV)
Aged for two years in former Woodford Reserve Bourbon Barrels, this applejack earned the Double Gold Medal at the San Francisco World Spirits Competition in 2010.
Notify me when this product is back in stock. 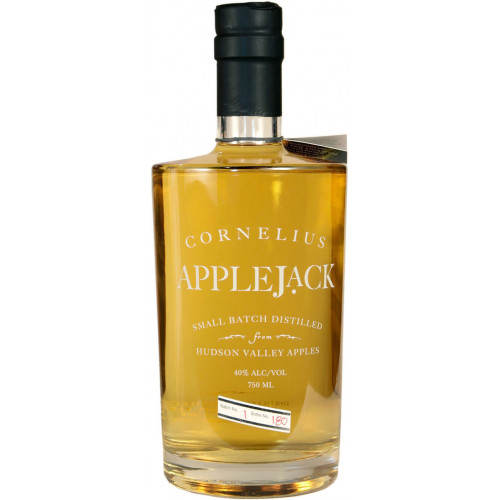 Applejack — a type of brandy distilled from apples — has a long and colorful history in the United States. As early as 1630, colonists in New England and Virginia began cultivating apple orchards, and by the turn of the century, had begun distilling apples into applejack. George Washington is said to have distilled applejack on his Mount Vernon estate, and during the Revolutionary War, troops under his command were rationed applejack while campaigning in New England. In addition, during Prohibition, the Jack Rose — a cocktail made from applejack, grenadine and lemon juice — became a staple drink at speakeasies across the country.

Harvest Spirits' Cornelius Applejack is made from apples harvested exclusively at Golden Harvest Farm, a third-generation farm situated in the Hudson Valley. Derek Grout, the brainchild behind Cornelius Applejack (his family also owns Golden Harvest Farm), decided to distill applejack for one simple reason: his family farm's 20,000 trees produce many more apples than the farm can actually sell. "You can make pies, donuts, or you can freeze them," says Grout of the extra apples, "but they're never quite as good as fresh. And cold storage costs you money." After distilling the apples, however, Grout lets the applejack mature and become more valuable. "I don't know any other way of processing an apple where the apple pays its own rent."

Cornelius Applejack is made by adding a strain of yeast commonly used to produce Champagne to apples that Grout sources from his family farm and presses at the distillery (no grain spirits are used). After the apple cider has fermented for a week, the wash is distilled three times through Grout's hybrid, copper pot and column stills. Following distillation, the applejack is matured in barrels that were previously used to age Woodford Reserve Bourbon. As a result, Cornelius Applejack has an aroma of honey and vanilla that is complimented by the sweet scent of fresh apples. The initial flavors of caramel and butterscotch are similar to bourbon, and give way to lighter notes of fruit and a hint of cinnamon and spice.

After the applejack has matured for two years in the ex-bourbon casks, each batch is brought to proof and each single-barrel bottle is filled and labeled by hand. Cornelius Applejack earned the Double Gold Medal at the San Francisco World Spirits Competition in 2010.

"Every morning when I walk in I'm hit with the smell," says Grout. "Slightly alcoholic, slightly funky, definitely oaky. It's a place with potential, the potential to make something that's really brilliant." Try a brilliant applejack today!

Aroma of apples, honey and vanilla. Initial flavors are reminiscent of bourbon — caramel, butterscotch, honey and toffee — and are complemented by a sweet touch of apple.