A blend of American barley and Canadian rye, this refined and unique whiskey is named after a multi-colored breed of Corgi.
Notify me when this product is back in stock.

This product is available in: DC, IL, NJ Unfortunately, we can't ship to PO Boxes and APO addresses. 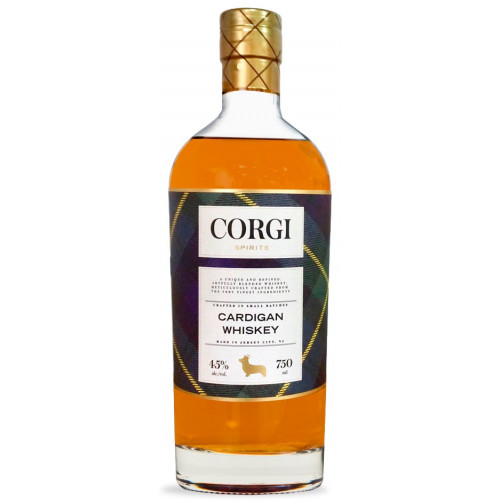 While they're mostly focused on gin, there's also Corgi Cardigan Whiskey. It wasn't named for the sweater, but rather a breed of Corgi, it's a blend of different whiskeys. Half of it is a 4-year-old American barley, the other half Canadian rye. After blending they get another period of rest in barrels that used to hold Jack Daniels whiskey, before being bottled at 90 proof.

Founded in 2017 by Bob Hagemann and owned by his parents, Bob and Nancy, Corgi Spirits is a family-run craft distillery, the first and only one in Hudson County, New Jersey. Hagemann's fascination with all things British led to the company's logo, a Corgi wearing a crown. The breed perfectly represents the nature of the distillery: playful and fun, yet regal and distinguished.

The distillery was named "New Jersey Distillery of the Year" twice in a row, and its small-batch spirits have garnered several other awards. Their range goes from gin (Earl Grey Gin, Pembroke Gin, and Barrel-Rested Gin), whiskey (Cardigan Whiskey), and vodka to seasonal spirits such as the Very Merry Gin, Bee Blossom Gin, and Garden Party Gin. The gins and vodkas are made from potatoes, making them super-smooth and gluten-free. If you're in the area, they offer tours and tastings in their tasting room and on their outdoor patio.
Explore all Corgi Spirits bottles >>