Size750mL Proof96 (48% ABV)
This Coppersea Straight Rye meets all the strict criteria to be called an Empire Rye. A mash bill of 80% unmalted rye and 20% floor malted barley, both grown on a certified organic farm in upstate New York, this classic rye expression features an intriguing plethora of flavors.
Notify me when this product is back in stock. 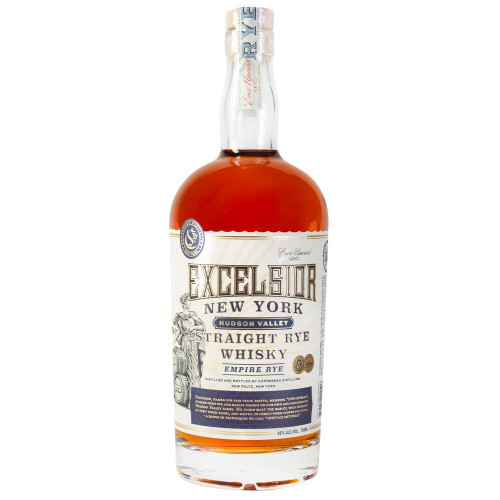 At the 75-acre certified organic farm in the Hudson Valley, "heritage distilling" includes open fermentation, direct fired stills and floor malting which has been little used in the past 300 years. In 2012, Coppersea became the first distillery in New York to floor malt its own, organic grain. This special process allows the grain to sprout over the course of five days, converting starch into precious sugars and enzymes which are needed to feed the yeast that’s added during fermentation. While risky — the grain can mold if left moist for too long — the payoff is big, producing a grindable quality and a nutty, roasted flavor in their locally sourced, 100% Hudson Valley green malt. Coppersea is one of the rare distilleries in the world that malts its grain in-house. They say fire is flavor and Coppersea whiskies are double distilled using a fire copper technique, directly firing their still to create flavors that would otherwise be left out in a steam-jacketed distillation.

In 2015, Coppersea was one of the six founders of Empire Rye, a set of rye whisky standards that pay an homage to New York State's pre-Prohibition style rye whisky. An Empire Rye whisky needs to conform with strict standards, including that 75% of the mash bill is New York rye grain. The remaining 25% must also be from New York but can be any grain. The Excelsior Empire Straight Rye of course meets the neccessary criteria. Aged for a minimum of 2 years in new American Oak casks and bottled at 96 proof, it features a mash bill of 80% unmalted rye and 20% floor malted barley. It is their first "classic" rye expression with an intriguing plethora of flavors, including, but not limited to cedar, orange marmalade and cherries. To be enjoyed in classic rye cocktails, straight over ice or neat. A perfect homage to old school New York.

Greeting you with notes of cedar, orange marmalade, and cacao nibs on the nose. On the palate, it leads with caramel, cherries and cinnamon. The finish is long and complex, bringing forwards flavors of pecans, malted milk balls and campfire.