Size750mL Proof100 (50% ABV)
Crafted with 100% winter cereal rye from the Frey Ranch, this whiskey is bottled-in-bond. It was produced at one distillery, by one distiller, during one distillation season, and bottled at 100 proof without chill filtration. It's won "Double Gold" at the SFWSC in 2021. 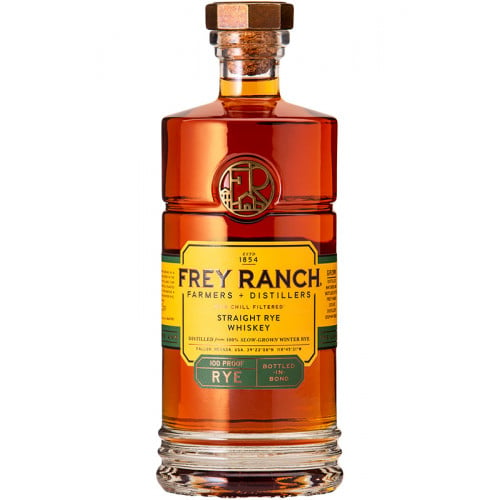 Frey Ranch is a true farm distillery that grows its own grains, distills, matures, and bottles its spirits on-site. The distillery was established by Colby and Ashley Frey on the farm where the Frey family has been growing wheat, rye, barley, and corn for over 165 years. The Frey Ranch Estate Distillery officially opened in 2014, after distilling spirits since 2006. The Freys are pioneers of distilling in Nevada, who also mastered the craft of making vodka, gin, and absinthe, before introducing their first whiskey.

In the lush farm oasis nestled in the heart of the Lake Tahoe Watershed just outside of Fallon, Nevada, each of the slow-grown grains is specifically grown for their whiskeys. Following the family’s creed "Be good to the land and the land will be good to you," which is engraved on every bottle of Frey Ranch Straight Bourbon Whiskey, the Freys practice sustainable farming on more than 2,000 acres of their land. Born a farmer, Colby Frey has learned the value of doing things the right way, not the easy way. Pursuing the bold and bright vision of raising a whiskey of the land, and dedicated to crafting the highest quality whiskey, the Freys use custom state-of-the-art distilling methods that are blended into every bottle of their sustainable Nevada-born spirits. Distilling the grains that they grow themselves gives the Frey Ranch distillery complete control over every step of the process, and the quality of the final product.

The Frey Ranch Straight Rye Whiskey is crafted with a mash bill of 100% winter cereal rye that is grown sustainably on the Frey Ranch. It's a bottled-in-bond expression, meaning that it's crafted by one distiller, at one distillery, during one distillation season. It also means it's bottled at 100 proof without chill filtration, making for a full-flavored expression with a delicious balance of sweetness and spice. The whiskey has garnered several awards, including a "Double Gold" at the San Francisco World Spirits Competition in 2021.

Get your bottle of this 100% rye whiskey today!

Wood and rye spice, vanilla, and caramel aromas lead the charge on the intense nose, followed by grapefruit zest, almond, and honey. The palate has a balance of sweetness, peppery spice, and ginger, culminating in a long finish with honey, raisin, and dark chocolate.