Learn more
Size750mL Proof100 (50% ABV) *Please note that the ABV of this bottle may vary
A quintessential, 100% New York Bourbon, crafted in the Hudson Valley with pre-Prohibition methods, including floor malting, open fermentation and "true fire" distilling. A classic, low-barrel proof expression, with notes of fig, almond and woodsmoke.
Notify me when this product is back in stock. 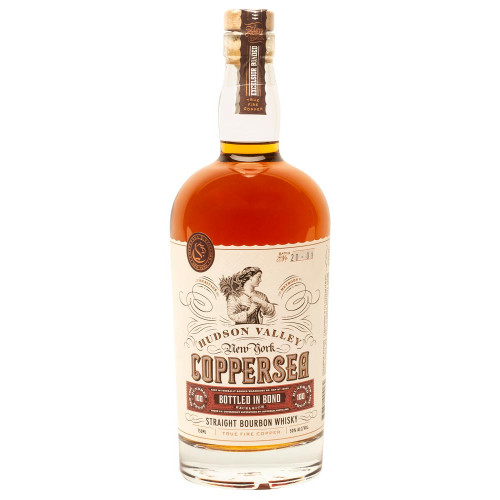 At the 75-acre certified organic farm in the Hudson Valley, "heritage distilling" includes open fermentation and floor malting which has been little used in the past 300 years. In 2012, Coppersea became the first distillery in New York to floor malt its own, organic grain. This special process allows the grain to sprout over the course of five days, converting starch into precious sugars and enzymes which are needed to feed the yeast that’s added during fermentation. While risky — the grain can mold if left moist for too long — the payoff is big, producing a grindable quality and a nutty, roasted flavor in their locally sourced, 100% Hudson Valley green malt. Coppersea is one of the rare distilleries in the world that malts its grain in-house.

They say fire is flavor and Coppersea whiskies are double distilled using a fire copper technique, directly firing their still to create flavors that would otherwise be left out in a steam-jacketed distillation. This allows the mash to caramelize as it cooks, giving Coppersea spirits an enhanced flavor profile that lends itself to a rich mouthfeel and depth of complexity and flavor.

The name of the Bottled-In-Bond release is a historic reference to the 1897 Bottled in Bond Act, which mandated that whiskey is made, aged and bottled entirely by one distillery, from barrels filled in one season, by one distiller. Add the word Excelsior, meaning "ever upward" and you get a 100% New York Straight Bourbon, produced in the old-fashioned way. Aged for 4 years in new American oak casks, which are all sourced in New York State, and bottled at almost barrel strength, this is a classic, pure expression. Since only a dash of water is added to bottle proof, the Coppersea signature low-barrel proof really stands out at 100 proof. With notes of fig, almond and woodsmoke, it is a quintessential New York whisky.

On the nose, it’s candy corn, tickling you with some black pepper and nutmeg due to the high rye content. On the palate, there is fig, almond and woodsmoke. The finish is rich, smooth, with a salty aftertaste.