Learn more
Size375mL Proof96 (48% ABV) *Please note that the ABV of this bottle may vary
Crafted from 100% un-kilned "green" two-row barley malt, Big Angus is a tribute to Angus MacDonald, Coppersea’s founding Master Distiller.
Notify me when this product is back in stock. 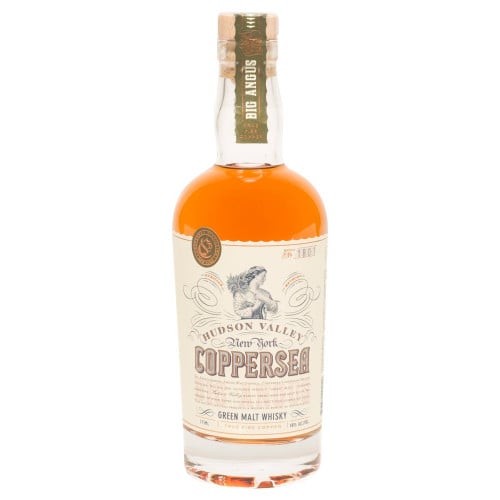 Big Angus Whisky is an oak-aged single malt, crafted from 100% un-kilned "green" two-row barley malt. Traditionally, malted grains are kiln-dried after the undergo the germination process, which generates nutty flavors and aromas, making it non-perishable and better for storage and shipping.

Coppersea is one of the rare distilleries in the world that malts its grain in-house, because of this, their fresh green malt is available for use immediately, which preserves the herbaceous, earthy qualities that are typically lost during kilning. A true farm-to-glass distillery, this ancient style of production is what makes Coppersea distillery so unique. Big Angus is a tribute to Angus MacDonald, Coppersea’s founding Master Distiller.

Richly herbaceous and fruity with robust notes of fresh hay, figs and lemongrass. Restrained barrel character offers caramel, vanilla and nutmeg. This is a very complex whisky to be savored and pondered in a snifter or copita, possibly with a few drops of water to reveal additional depth.