Size750mL Proof97 (48.5% ABV)
A blend of 2 sourced bourbons aged 4+ and 11+ years, this award-winning expression was crafted with brandy blending & bottling techniques. Bottled at 97 proof, the small-batch bourbon is rich and smooth with notes of grain, corn, citrus, and oak.
Notify me when this product is back in stock. 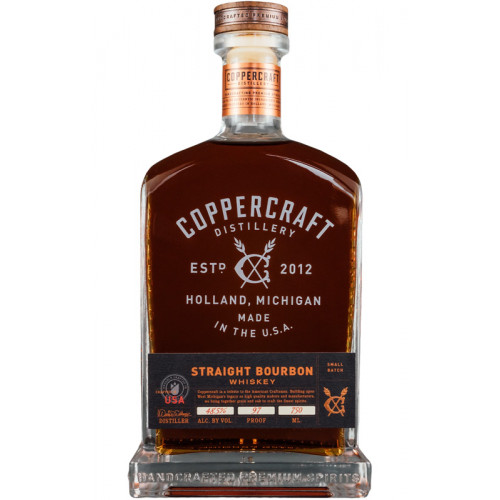 Founded in 2012 in Holland, Michigan, Coppercraft Distillery is on a mission to craft the finest whiskey. It's craft whiskey through-and-through, distilled, sourced, and blended from some of the best ingredients. Their whiskeys are aged heavily, with techniques that come from the world of cognac enabling them to explore the effects of distillation methods as well as the impact that different casks and environments have on the process of maturation.

The distillery is located on the coast of West Michigan, taking inspiration from the rich industrial history of the region, be it auto manufacturers, farmers, or a number of other entrepreneurs. The young distillery channels this entrepreneurial spirit of its surroundings, its young and passionate collective putting in the hard work. They have expanded their lineup of spirits to include whiskey, gin, vodka, and rum, as well as a range of canned cocktails ― the first Michigan distillery to do so. The official partners of the Detroit Lions were named Michigan Distillery of the Year by the New York Spirits Competition in 2018.

Both single-batch and specialty craft whiskey are produced at Coppercraft. Their Straight Bourbon Whiskey is a blend of bourbons aged 4+ and 11+ years. The rich and smooth flavor comes down to the brandy blending & proofing techniques that take 3 months from barrel to bottle. Bottled at 97 proof, this small-batch expression has garnered several awards, including a Double Gold Medal at the San Francisco World Spirits Competition for 2 consecutive years in 2020 and 2021.

The nose is bright with notes of citrus, fruit, corn, vanilla, hints of nuts, and oak. On the soft palate, you'll find a pleasant creaminess with grain notes, oak, and citrus zest. The medium finish has hints of spice, honey, and mint.