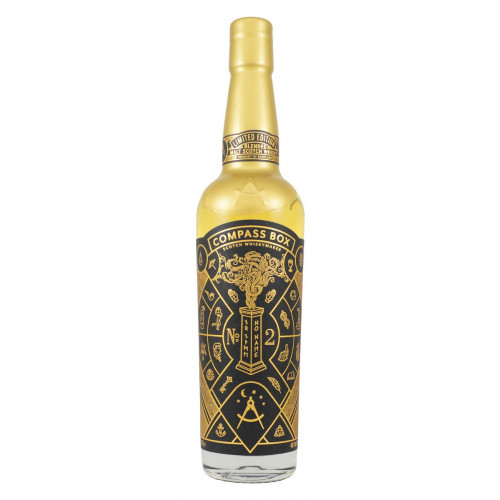 About Compass Box No Name No.2 Blended Malt Scotch Whisky

Compass Box was founded in 2000 by entrepreneurial visionary John Glaser, in London, England. After being in the wine industry, Glaser made a move to Diageo, where he came into the whisky industry. Compass Box is known to challenge convention and tradition in pursuit of "whisky and its enjoyment." Located in a seemingly incongruous London England, Compass Box is not a Scottish distiller but a blender of Scottish whiskies, combining the best casks from Islay, Speyside and the Highlands, and aging them in "a variety of woods from sherry casks to toasted French oak."

Glaser pushes the boundaries of innovation to new levels with his art of "whisky-making." Seemingly uninhibited by the norms of the formidable Scottish whisky industry, Glaser has proven himself a true alchemist. In 2005, his aptitude for winemaking prompted a disruptive experimental sensation; The Spice Tree release, a blended whisky made using inner staves, or wooden slats inserted into casks to enhance flavor. Wine-makers use this technique as a more economical way to add oak flavor wine.

This No Name No. 2 limited edition comes after the original No Name released in 2017, which was known then as the company’s peatiest whisky to date. No Name No. 2 is a blend of predominantly refill Sherry butt-matured Caol Ila, and Talisker matured in re-charred American oak hogsheads. The blend also includes Clynelish whisky matured in hogsheads, with a proprietary Highland malt blend finished in new French oak.

Bottled at 48.9% ABV, No Name No. 2 is incredibly intricate, with a sophisticated peatiness and notes dried fruit and red cherries. Created by lead whisky maker Jill Boyd, No Name No. 2 is potent yet refined with an interplay of peaty evolving toward a long, satisfying finish.

Highly complex peatiness and smokiness, accented by delicate cherry fruit notes. Full and concentrated on the palate, an interplay of peaty flavors develops throughout the long, satisfying finish.