Size750mL Proof90 (45% ABV)
Aged for a minimum of three years, this four-grain bourbon earned the Gold Medal at the San Francisco World Spirits Competition in 2013.
Notify me when this product is back in stock. 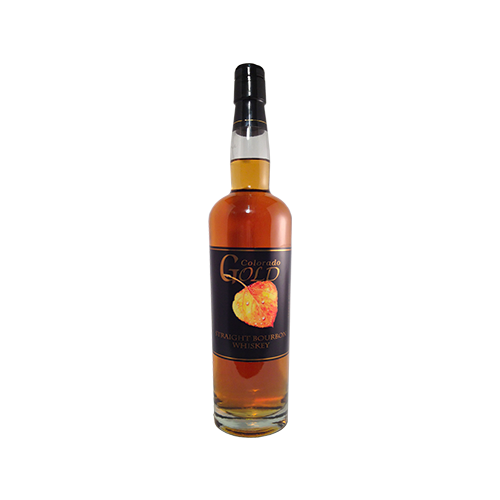 "As with most micro-distilleries, it started with a dream," says Peter Caciola, the owner of Colorado Gold Distillery. Situated along the southern slopes of the Grand Mesa in Cedaredge, Colorado (est. population 2,151), Caciola's distillery is the product of years of late nights and intense labor by Caciola himself, and his wife, Tammy. "We first talked about distilling our own spirits a good number of years ago,"Caciola continues. "After we made our dream a reality, we started discussing the idea of producing a great bourbon. Bourbon is the most American of all the spirits, and we're in the heart of the country, so we thought it would be the perfect thing to make."

Colorado Gold Straight Bourbon Whiskey is made using a mash of four locally-sourced grains: corn, rye, wheat and malted barley. Cedaredge's unique geography and climate — the quaint city is situated 11,000 feet above sea level and enjoys mild, snowy winters and hot, dry summers — creates flavorful, plump grains that are perfect for distillation. "Corn is the main ingredient in our bourbon," says Michael Almy, a Colorado native and the master distiller at Colorado Gold. "The wheat and malted barley give the bourbon a smoother, more sophisticated taste and the rye adds a touch of spice."

Once the grains have been harvested, they are mashed and fermented for five days with a unique strain of American whiskey yeast. Following fermentation, the bourbon is distilled twice through an 80-gallon, copper still heated by steam. Once the bourbon has been distilled, it is filtered for four hours before being poured into new, 53-gallon American oak casks that have been charred (the casks have a #3 char).

The bourbon is allowed to rest for a minimum of three years in the casks, which impart spicy notes of cinnamon and oaky spice to the bourbon, and mellow its notes of maple syrup, honey and roasted nuts. Following its beauty rest, the bourbon is brought to proof with pure spring water that has been filtered by a billion year old basalt stone. Then, each bottle is filled from a single barrel and labeled by hand.

Aroma of of earthy minerals, along with notes of roasted corn, apple pie and honey. Notes of maple syrup, honey and nutty dough are balanced by touches of cinnamon and woody spice. Smooth, slightly sweet finish.