Be the first to review this product
This limited-edition bottled-in-bond bourbon pays tribute to one of the founding fathers of bourbon with a delicious marriage of three 18-year-old mash bills from Buffalo Trace: two rye bourbons and a wheated bourbon.
Add to Wish List
Notify me when this product is back in stock.

Armed with distilling experience and a political pedigree, Taylor, together with Treasury Secretary John G. Carlisle, was instrumental in passing the Bottled-In-Bond Act of 1897 (27 C.F.R. 5.21). The act required that any spirit labeled as "Bonded" or "Bottled-in-Bond" be the product of one distiller at one distillery during one distillation season. In addition, the Act required that bonded spirits be aged in a federally bonded warehouse under U.S. government supervision for at least four years and bottled at 100 proof. Today, the Buffalo Trace Distillery continues the legacy of one of the founding fathers of bourbon with the Colonel E.H. Taylor collection that was first released in 2011.

This small-batch expression features a combination of 3 different 18-year-old bourbons and 3 distinct Buffalo Trace mash bills: two rye bourbon mash bills and a wheated bourbon. After their 18 years of maturation, they were blended and married together, before being bottled at 100 proof. Being a one-time bottling, this premium bottled-in-bond bourbon is bound to sell out fast.

There are aromas of vanilla, butter cake, caramel, and tea on the nose. The palate has caramel, cinnamon, and a pleasant sweetness throughout. Finishes long and satisfying with toasted oak, cinnamon, and a touch of spearmint. 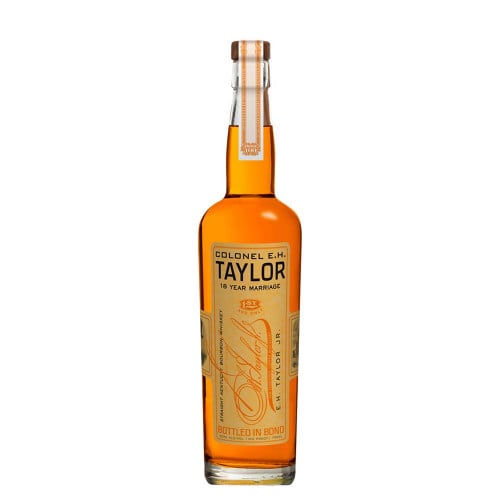