Size750mL Proof86 (43% ABV)
Handmade in Nashville, this Tennessee Whiskey is filtered through charcoal using the traditional Lincoln County Process.
Notify me when this product is back in stock. 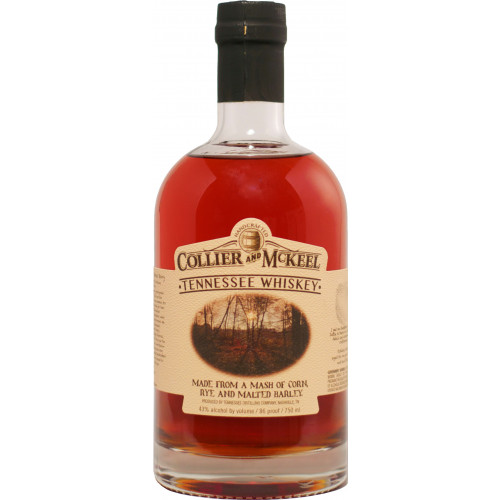 About Collier and McKeel Tennessee Whiskey

In July of 1794, President George Washington led a federalized militia of nearly 13,000 soldiers into western Pennsylvania in order to suppress the "Whiskey Rebellion." The rebels were protesting the Whiskey Excise Act, the first tax ever levied by the federal government on a domestically-produced product.

Following the rebellion, William Collier and James McKeel — afraid that federal troops would march on them — moved to Tennessee, bringing with them the tradition of handcrafting sour mash whiskey that the pair learned from their Scottish and Irish ancestors.

Situated just one mile from the Tennessee State Capitol in the heart of Nashville, Collier & McKeel Distillery pays tribute to Collier, McKeel and all those who brought the art of whiskey-making to Tennessee. The distillery, which is dominated by a 570-gallon Vendome copper pot still made in Kentucky, is housed in a late 19th century factory which was previously used to assemble automobiles.

Collier & McKeel Tennessee Whiskey is made from a mash of 70% corn, 15% barley and 15% rye. After sourcing the ingredients from local farms, Mike Williams, Collier & McKeel's master distiller, mashes and ferments the grains before distilling the wash through his hand-hammered pot still.

Once distilled, the whiskey is filtered through several feet of sugar maple charcoal that Williams sourced from local sawmills in Tennessee and burned on his family farm near Big Richland Creek. This filtering process, known as the Lincoln County Process, earns the whiskey the title of "Tennessee Whiskey" and imparts a signature, sweet yet smoky flavor to Collier & McKeel.

After filtration, the whiskey is aged is small, 15-gallon charred oak casks until Williams determines that the flavor profile of the whiskey is just right. The small casks provide a greater degree of interaction between the oak and the whiskey as compared to larger casks, and contribute notes of honey, oak and vanilla to the whiskey.

After maturation, the whiskey is brought to proof using limestone-filtered water sourced from the Big Richland Creek before each bottle is filled and labeled by hand. After bottling, Williams personally dips his thumb into ink and imprints a thumbprint onto each bottle as a sign of quality and craftsmanship.

Collier & McKeel Tennessee Whiskey has an aroma of smoke and charcoal along with hints of sweet corn. The initial flavor is sweet and smoky, with faint notes of a spicy earthiness. The finish is smooth, with flavors of vanilla, honey and oak that provide for a touch of sweetnees.

Pick up a bottle of Tennessee Whiskey today!

Aroma of smoke and charcoal along with hints of sweet corn. Initial flavor is sweet and smoky, with faint notes of a spicy earthiness. Finish is smooth and sweet, with flavors of vanilla, honey and oak that predominate.