Size750mL Proof100 (50% ABV)
A collaboration of two Seattle brands pays homage to the bravest of the northbound prospectors — the ones who didn't get cold feet.
Notify me when this product is back in stock. 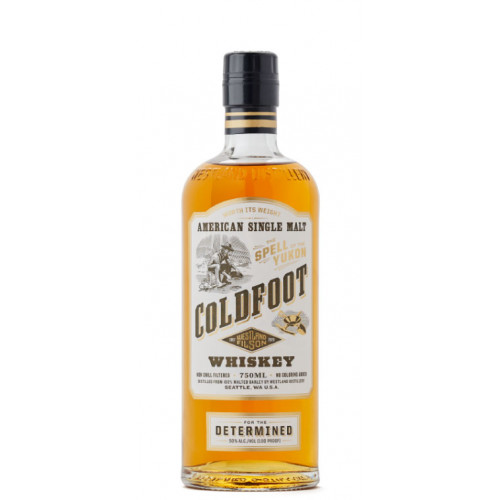 Westland Distillery was co-founded by Matt Hofmann in 2010 in Seattle, WA. Westland Distillery mashes, distills, matures and bottles American Single Malt Whiskey in the heart of the Pacific Northwest. Hofmann — Westland’s co-founder, Master Distiller, and honorary pioneer of the American Single Malt whiskey movement — fell in love with the single malt after going to Islay and experiencing the golden drams of Islay.

Coldfoot is a fresh collaboration of two Seattle brands: the Westland Distillery and C.C. Filson Co., a clothing manufacturer for outdoor enthusiasts. The partnership grew from a mutual understanding of what makes the Pacific Northwest what it is — integrity, devoid of pretentiousness. They make real things while observing tradition.

This collection pays homage to the brave prospectors of the late 1800s who refused to follow the majority rushing from Seattle to Dawson, and instead broke off in search of independence and freedom, albeit less gold. They ventured further north, to an outpost called Coldfoot. Their bravery, perseverance, endurance, and ambition is what brought the two brands together, despite coming from different paths. Coldfoot American Single Malt Whiskey Edition 1 is limited to just 978 bottles and combines several elements that Westland is known for.