Size750mL ProofBourbon – 90 (45% ABV)
Made in homage to Buffalo Bill Cody, Cody Road Bourbon and Cody Road Rye are each aged for one year in American oak casks.
Notify me when this product is back in stock. 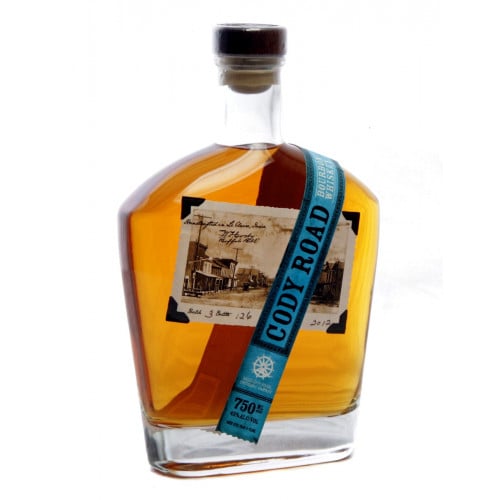 In the 1860s, following his service to the Union Army in the Civil War, William Frederick Cody signed a contract to supply the Kansas Pacific Railroad with buffalo meat to serve at its canteens. In eighteen months, Cody killed 4,280 American bison (commonly known as buffalo), earning himself the nickname Buffalo Bill. Cody shared the nickname with Bill Comstock until the two competed in a buffalo-shooting match over the exclusive right to use the name, which Cody won by killing 69 bison to Comstock's 48.

Cody would go on to become a famous showman, participating in Wild West shows across the United States, and would ultimately have roads, towns and even a football team named after him. In LeClaire, Iowa — just a few miles away from where William Fredrick Cody was born — Ryan and Garrett Burchett pay homage to the showman, father and war hero with Cody Road Bourbon and Cody Road Rye.

Cody Road Bourbon and Rye are each made from entirely local ingredients. Cody Road Bourbon is made from a mash of 70% corn, 20% wheat and 10% unmalted barley. The Burchett brothers source the corn from a local farmer in LeClaire, while they purchase the wheat and barley from a farmer in Reynolds, Illinois. Cody Road Rye is made from a mash of 100% rye grains which the Burchett brothers source from a farmer in Fulton, Illinois. After the grains are milled and mashed, they are fermented for six days before being distilled in a 1,000 liter, handmade Kothe German pot still, which the brothers nicknamed Rose.

After distillation, both the bourbon and the rye are aged for one year in 30-gallon, charred oak casks. The casks, which are made from American oak trees harvested in Iowa and Illinois, are assembled at a cooperage in Minnesota before being charred to a perfect finish and shipped to Mississippi River Distillery. After aging the bourbon and rye, the Burchett Brothers fill and number each bottle by hand, noting its batch and bottle number.

"We have two incredibly unique products with Cody Road Bourbon and Cody Road Rye," says Ryan, standing just outside his distillery located on Cody Road. "Iowa makes the best corn in the country, and it translates into an amazingly sweet, complex bourbon. Our rye showcases the wonderful spiciness of the grain, along with delicate fruitiness that is often lost in modern ryes."

Only a limited number of Cody Road Bourbon bottles have ever been made, and Caskers members have exclusive access to the Cody Road Rye before it is released to the public! Pick up a pair today!

Bourbon: A nose of butter and toasted nuts. Brown sugar, light leather and and vanilla are followed by notes of apple and spice. Gentle and silky, with finish of caramel and buttered bread.