This product is available in: CA, DC, NJ, NY, WA Unfortunately, we can't ship to PO Boxes and APO addresses.

Size1L Proof80 (40% ABV)
Known for their critically acclaimed potato vodka, Chopin has released this complex, flavorful rye expression that earned 91 Points Wine Enthusiast, in 2016.
Notify me when this product is back in stock.

This product is available in: CA, DC, NJ, NY, WA Unfortunately, we can't ship to PO Boxes and APO addresses. 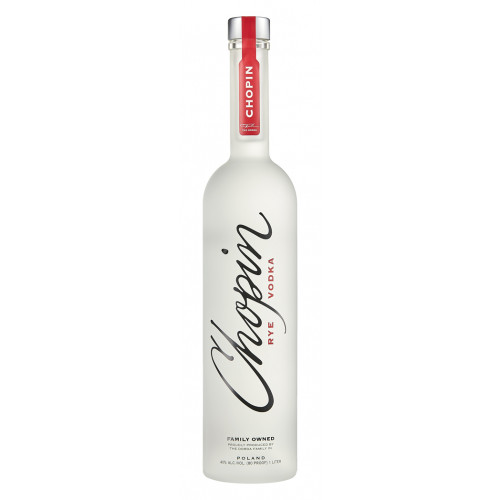 Chopin Vodka is named after the famous Polish classical composer Frédéric Chopin. Produced by Polmos Siedlce, their classic vodkas are quadruple distilled from either potatoes, wheat or rye grains. Chopin is a small batch vodka that first made its debut in North America in 1997.

Chopin’s potato vodka is critically acclaimed, earning several gold and silver medals from the San Francisco World Spirits Competition. Though Chopin is more renowned for their potato vodkas, their label has expanded their portfolio to include what they consider to be some of the "finest single ingredient" vodkas.

Chopin Rye Vodka is distilled from 100% organic rye grain, a classic grain that has made quite the reappearance in the past two decades. This rye vodka is meticulously distilled four times showcasing a fully complex, spicy flavor profile. “Its peppery flavor profile can be enjoyed straight up, mixed into a spirited Bloody Mary, or poured to compliment sweet cocktails” (producer). This expression earned 91 Points from Wine Enthusiast.

Subtle aromas of rye bread. Vibrant pepper flavor on the palate, with a medium body. The finish is short and crisp.