Size750mL Proof80 (40% ABV)
Crafted in Montreal, this vodka is made with 100% Quebec corn and a secret blend of chili peppers from Turkey, Peru, and Mexico. Bottled at 80 proof, it's a bold and smoky vodka with notes of tropical fruit and an intense hot pepper heat. 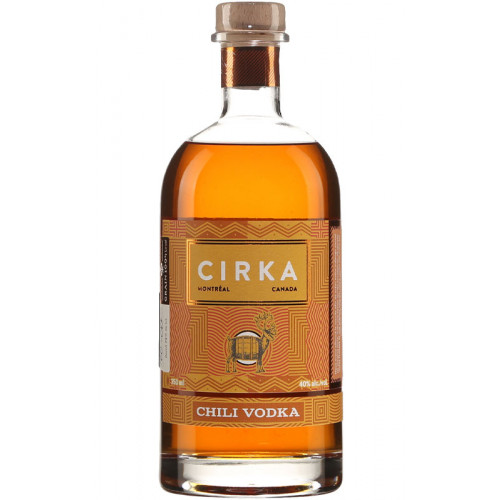 Founded in 2014 by Paul Cirka, Circa Distilleries' goal is to craft Canadian whisky. As is often the case with younger craft distilleries, Cirka has been making several clear spirits while waiting for the whisky to mature. The artisanal distillery is located in Montreal, where they employ sustainable practices, relying on local suppliers. This means that local grains, botanicals, and pure water are used in the production process.

Chili Vodka is crafted with 100% Quebec corn and bottled at 80 proof. It's the perfect vodka for lovers of anything spicy, as it employs a secret blend of chili peppers from Turkey, Peru, and Mexico. The spirit is bold with smoky and tropical fruit notes, along with an intense heat from the hot peppers.

Grab your bottle of this chili-flavored vodka!

The nose is spicy with smoke and tropical fruit notes of passionfruit and mango, along with hints of coffee and chocolate. The palate has just the right amount of chili pepper heat along with fruit and smoke, the latter persisting through the finish.