Size750mL Proof91 (45.5% ABV)
Crafted with yellow corn, malted rye, caramel malted barley, and honey malted barley, this high-malt bourbon is aged more than 2 years and finished using a version of the solera method.
Notify me when this product is back in stock. 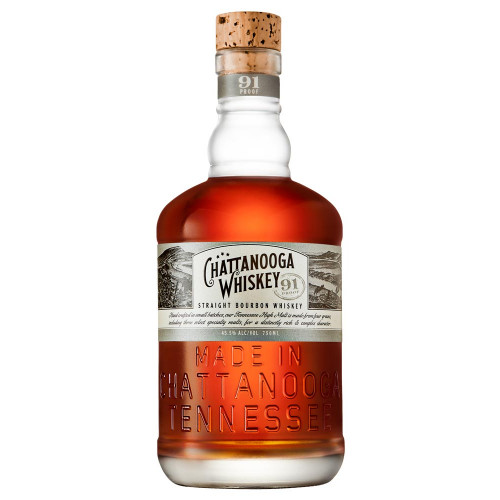 Chattanooga Whiskey was founded by Tim Piersant and Joe Ledbetter in 2011. Inspired by the city's rich distilling history, the two went on a mission to bring back "Whiskey to the People" and Hamilton County, and did not shy away from the battle to change the laws of their state in its pursuit. In March 2015, the company’s Experimental Distillery opened in the heart of downtown Chattanooga, which keeps over 100 different barrels in its aging cellar.

The 91 Straight Bourbon is crafted with a mash bill of yellow corn, malted rye, caramel malted barley, and honey malted barley. The extended fermentation takes a whole week and works toward making the high-malt character shine. It is then aged for more than 2 years in charred and toasted white oak barrels, before being finished in a version of the solera process that involves a 4,000-gallon charred oak solera barrel that is never emptied. The 91-proof bourbon has received a Gold Medal at the 2019 SIP Awards.