Learn more
Size750mL Proof90 (45% ABV) *Please note that the ABV of this bottle may vary
Crafted with a mash bill of 75% corn, 21% rye, and 4% malted barley, this whiskey employs a version of the solera method. This means that the aged whiskey gets finished in a giant barrel that is never emptied, meaning that the blend of 2 to 10-year-old whiskeys makes for a complex and classic bourbon profile.
Notify me when this product is back in stock. 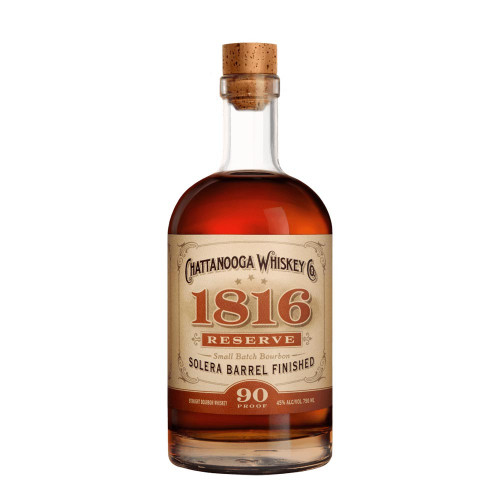 Chattanooga Whiskey’s range comprises three lines. Its signature line of straight bourbon whiskey, Tennessee High Malt, is made from four grains, including three select specialty malts. The 1816 Bourbon Series consists of award-winning bourbons that started it all, while the Experimental Series is a limited collection of whiskeys and spirits made at the 100-gallon Experimental Distillery, utilizing a multitude of grains, barrels, techniques, and unique ingredients.

The Chattanooga 1816 Reserve is crafted with a mash bill of 75% corn, 21% rye, and 4% malted barley. It has them use their version of the solera process, meaning 100 fully-aged barrels get combined into one giant barrel that is never emptied. Following each small-batch bottling, the barrel is topped off with 10 to 15 mature barrels. In practice, the expression is a blend of 2 to 10-year-old whiskeys. Bottled at 90 proof, it's a complex spirit with a soft and sweet straight bourbon profile.

Grab a bottle of this award-winning solera-finished whiskey today!

It's a complex whiskey with a pleasant sweetness on the nose, along with charred oak and caramel. The classic soft palate has sweet vanilla and spicy cinnamon, culminating in a finish with lingering spice and oak notes.