Size750mL Proof100 (50% ABV)
Chattanooga Whiskey 1816 Native is a limited edition high rye bourbon finished in beer barrels. It is a blend of barrels between 2 and 10 years old, finished in bourbon barrels that the distillery lent to local craft brewers for aging their beer.
Notify me when this product is back in stock. 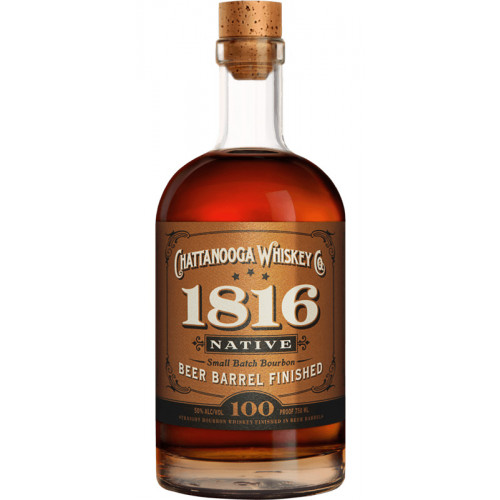 Chattanooga Whiskey was founded by Tim Piersant and Joe Ledbetter in 2011. Inspired by the city's rich distilling history, the two went on a mission to bring back “Whiskey to the People” and Hamilton County, and did not shy away from the battle to change the laws of their state in its pursuit. In March 2015, the company’s Experimental Distillery opened in the heart of downtown Chattanooga, which keeps over 100 different barrels in its aging cellar. In 2015, they released the first whiskey produced in Chattanooga in 100 years, Chattanooga Whiskey “100”, and began crafting their malt-forward style of straight bourbon whiskey, Tennessee High Malt, which was released in August 2019, marking a new era in the company history. In March 2017, the company opened its second distillery in downtown Chattanooga, the Riverfront Distillery, transforming a historic car dealership into one of the largest craft bourbon distilleries in the South, with a dunnage-style heated barrelhouse with room to age more than 4,500 barrels of whiskey. This is where the distillers make their signature Tennessee high malt.

Chattanooga Whiskey 1816 Native is a limited edition bourbon finished in beer barrels. It is a blend of barrels between 2 and 10 years old. For this expression, the distillers partnered with local craft breweries, giving them bourbon barrels to age their unique beers. The barrels were then returned and used for finishing the bourbon made from a mash bill of 75% corn, 21% rye, and 4% malted barley. The result is eight different bourbons, layered with unique flavors from the traces of beers and whiskey that came before them.

The nose of the whiskey that matured in Three Taverns’ Imperial Milk Stout barrels is hoppy, with wafts of red pepper and cloves. The palate starts sweet, followed by spicy cinnamon, and more hops and cloves. The finish is sweet, with fading hops and lingering butterscotch.